Fast forward to the silver screen 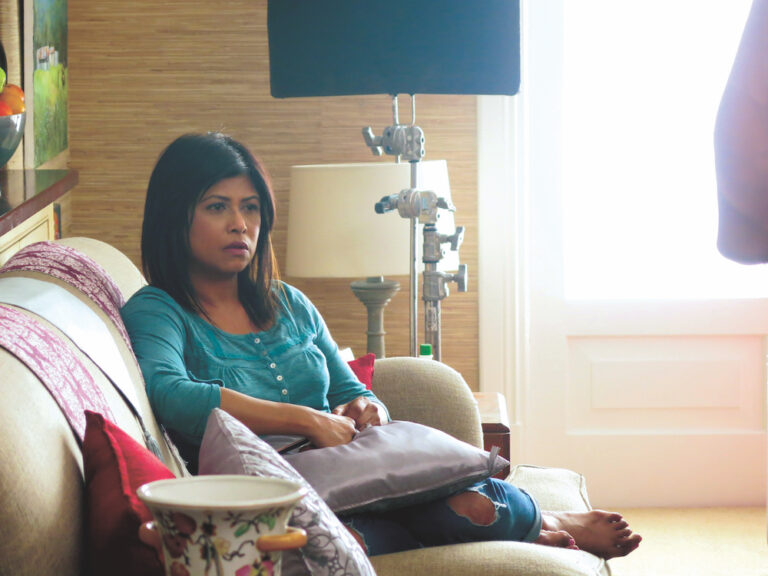 She’s the “it girl” of the screen right now with lead roles in a hit TV soapie and two upcoming movies. Meet Durban’s Jailoshini Naidoo

I’m relieved when Jailoshini bounces into the Musgrave restaurant where we’re finally meeting for a chat. After a good few weeks of my stalker behaviour, it’s good to see her in the flesh, as fresh and lovely as she looks on the screen.

Her reticence about the interview was not because she’s a diva, but because she has so little spare time.

Working 12 hours a day Monday to Friday filming the e.tv drama Imbewu: The Seed and hosting a Lotus FM radio show on Saturdays doesn’t leave much leeway. Add her MC work and throw in a few movies and it’s no wonder she’s hard to get.

But when you do pin her down, you get the very best of one of Durban’s most prolific stars, who also happens to be really grounded and totally captivating.

On January 25, 2019 she returned to the silver screen in
3 Days To Go, a local family drama in which she plays Melissa Isaac, one of four dysfunctional siblings who return home for their father’s funeral.

“It’s a beautiful movie which tells the familiar story of siblings who pretend their lives are perfect when they’re actually terrible,” says Jailoshini. “I’m the oldest sister who has a complicated and miserable life with an abusive husband and a wayward daughter. Simply, I’m washed out.”

It’s an interesting role for Jailoshini whose real self is so far removed from Melissa’s character. “It certainly extended me as an actress and made me dig deep, which is great because I would hate to be stereotyped.”

She loved working with writer and director Bianca Isaac for the first time, was “charmed” to work with Indian actress Lillete Dubey (who plays her mother) and was thrilled to be reunited with her “old” friend Leeanda Reddy, who plays one of her sisters.

“Working together was great fun and we are all so proud that the film was entirely made in and around Durban, with the family home set in Kloof. From the beaches to the city, it really showcases Durban and its people.”

Another movie in which Jailoshini plays a lead role is Keeping Up With The Kandasamys which was released in 2016 to become South Africa’s highest grossing movie worldwide.

She reprises her role as Jennifer Kandasamy in the sequel Kandasamys: The Wedding due for release in April this year, which Jailoshini promises will be “bigger and better” than the first movie.

The shy young Chatsworth girl who only discovered her love for drama in high school is not only an acclaimed film and TV actress, but also an accomplished comedian and an award-winning stage actress, whose one-woman play At The Edge is legendary.

Until 10 years ago she was also a full-time drama teacher. “I majored in Education, English and Drama at the University of Durban Westville and although I wanted to act, my family didn’t think it was a real job.”

“When I walked into the campus drama department, I knew I was home. I lived and breathed theatre, but I decided teaching was my safety net.”

She kept both jobs for several years, and still managed to work as an M-Net continuity TV presenter.

“I’d finish school on a Friday afternoon, fly to Joburg and work all weekend and then fly back on the red-eye on a Monday morning in time to get to school,” she laughs.

The woman with the loveable Aunty Rumba alter ego thanks her role as the “colourful, coloured hobbo” Natasha in Themi Venturas’s production of Jimbo at the Playhouse as being a turning point in her career.

“It got me an interview with SABC’s Eastern Mosaic where I then worked as an anchor presenter for ten years travelling all over the country and the world. It also introduced me to Durban producer Steven Stead, who I subsequently did a lot of work with and who is now one of my closest friends.”

While she has tried every performing genre with great success, it is still the stage that truly captures her heart.

“I love them all, but it’s the smell and feel of a theatre, having the audience right there and the immediacy of their reaction that feeds my soul,” she says. “TV and film are a lot of hurry-up-and-wait – you need the patience of a saint.

“A lot of people want to be actors because they think it’s glamorous and they’ll be famous. It’s bloody hard work and fame should have nothing to do with it. It’s a crazy life and if you don’t have the passion, you’ll never have the longevity.”

Jailoshini has the passion in spades and the energy to match. “Everything I do is on fast forward and I always feel like I am rushing to get somewhere or do something.” Which is why she loves nothing more on a rare night off than putting her jarmies on and watching TV. “Having time out with myself or my closest friends – where I can just be me – is the most delicious and special thing.”

Grade 10 Subject Choices: How the Considerations have Changed

The Value of Early Learning

Wrapped Up for Winter

Fashion essentials to keep out the winter blues.  H&M  QUEENSPARK  All items available from Gateway…