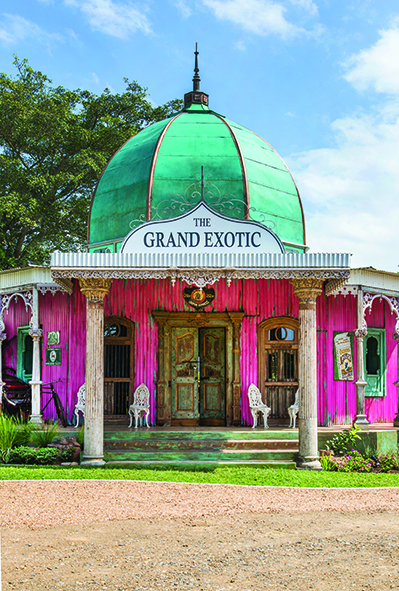 The Grand Exotic is opening its doors slowly, in complete contrast to the immense, intense amount of work which owner Sarah (Dykins) Owen, and partner, Curt Wolff have put into the project.

It’s not possible to fling open the doors of The Grand Exotic, because although it’s growing organically – pretty much like all of their projects – it still needs to be perfect, and there are I’s to dot, and T’s to cross. One such T is the terrain – a road which needs to move, to provide ample guest parking. Yes, it’s being rerouted …

Sarah has been in the hospitality industry for many years. She was renowned for Churchill’s Antique Cafe, off Lilian Ngoyi Road, everyone’s favourite cafe-cum-antique-shop-cum-quaint-little-Victorian house with astonishing decor. Sarah travelled extensively to India, France and Buenos Aires, and containers would cross the seas laden with massive carved doors, colourful gilt-edged saris, authentic old signage, and wonderful wooden artefacts, all of which would either be incorporated into her design and decor, or snapped up in her vintage shops by hunters of quirkiness. The decor was literally unlike anything Durban had seen, and Sarah not only dreamt it up, but painstakingly, on ladders, 24/7, physically did it. She’s turned building and decorating into an extreme sport.

Ten years ago, she sketched her vision for The Grand Exotic on a scrappy piece of paper. She’d bought the land in Sheffield, but red tape – and just about every colour too – meant the project stalled constantly. She points to the back boundary: “This was a slope, filled with dense bush. Curt excavated, then cleared the bush … no fewer than three times, waiting for the various hoops we had to jump through.”

After selling Churchills – and bundu and head bashing at Sheffield – Sarah opened Crystal Barn wedding venue/cafe/shop on her farm in the KZN Midlands. Once again, she and Curt rolled up their sleeves, and created this astonishing venue from nothing … with all her colourful saris, building material from everywhere including India, and a range of paint colours and techniques hitherto unknown in the Midlands. It was a great success, but still, they hadn’t forgotten The Grand Exotic.

Curt and Sarah learnt a great deal from Crystal Barn, but still, they began from scratch with The Grand Exotic, still modelling their vision on that scrappy drawing, now an architect’s plan. It’s not your usual plan of course, because, among other things, Sarah likes angles. Forget dreary straight lines: “I think in angles,” she laughs. No matter where you sit in the venue, no detail has been left to chance, so you’re certain to have a fresh angle on something. Anything pretty or exotic. Sara chooses a paint colour, experiments with it, and usually, that’ll be just the first layer, with others partially covering it, so there’s a depth, a texture or a sense of antiquity. Sarah has an instinct for colour, and she’s neither frightened by it nor feels herself beholden to keep it. She’s constantly questioning herself about the shade, the intensity, the feel …

Most of the fittings and fixtures have emerged out of the 400 square metre storage shed in which Sarah stashed her favourite pieces. Some, she says, from over 17 years ago. But it doesn’t mean she necessarily employs the door or window as it was intended – she puts together pieces of unrelated items, perhaps paints them to pull it together, and creates something entirely different.

There’s very little of The Grand Exotic which hasn’t been made by Sarah and Curt. Sarah handmade many of the chandeliers out of Indian pots, embedded saris into the screed on the floor, inlaid “tiles” of broken plates and antique vases into the steps, painted 16 “stained-glass windows” for the ceremony and cafe space, and – on her veranda at home – painted and decoupaged fabric on to each of the 64 panels destined for the dome.

Curt built The Grand Exotic – he created the framework for the dome, attached all the panels, and had it hoisted by crane on to the building. But first and foremost, he’s a landscape gardener, responsible for creating magnificent gardens in and around KZN, including the beautiful gardens at the Oysters in uMhlanga. He is fully responsible for the greenery, in particular, the “secret garden” at the back of The Grand Exotic. “That secret garden – the rockery and water feature – was the first thing Curt created,” says Sarah.

“From there, everything radiated.” It’s a magical little space.

The Grand Exotic is a certain traffic stopper. Something extraordinary, unexpected, on the doorstep of many prestigious north coast residential estates. There are two large function rooms: the main one for weddings and functions, and the dome for the ceremony, with seating in a symbolic circle of love – linking the two is a wonderfully crazy bar. The two main rooms can be hired separately for functions and conferences.

Well respected caterer Jacqui Rey heads up the function catering – there’s a full catering kitchen on site, including generator – and Cathryn Hulett is the in-house event co-ordinator. The cafe – with barista station – and antique shop will be open during the day. To add to the experience, there’s a delightful wellness spa on site.

As would be expected, Sarah has innumerable creative and crazy concepts for The Grand Exotic. Wonderfully memorable events, big and small, exclusive and inclusive. But for now, it’s about to open its delightfully prepossessing doors, and everyone knows it’s guaranteed to be both Grand and Exotic.