Aquascaping: Not Just Water with Fish 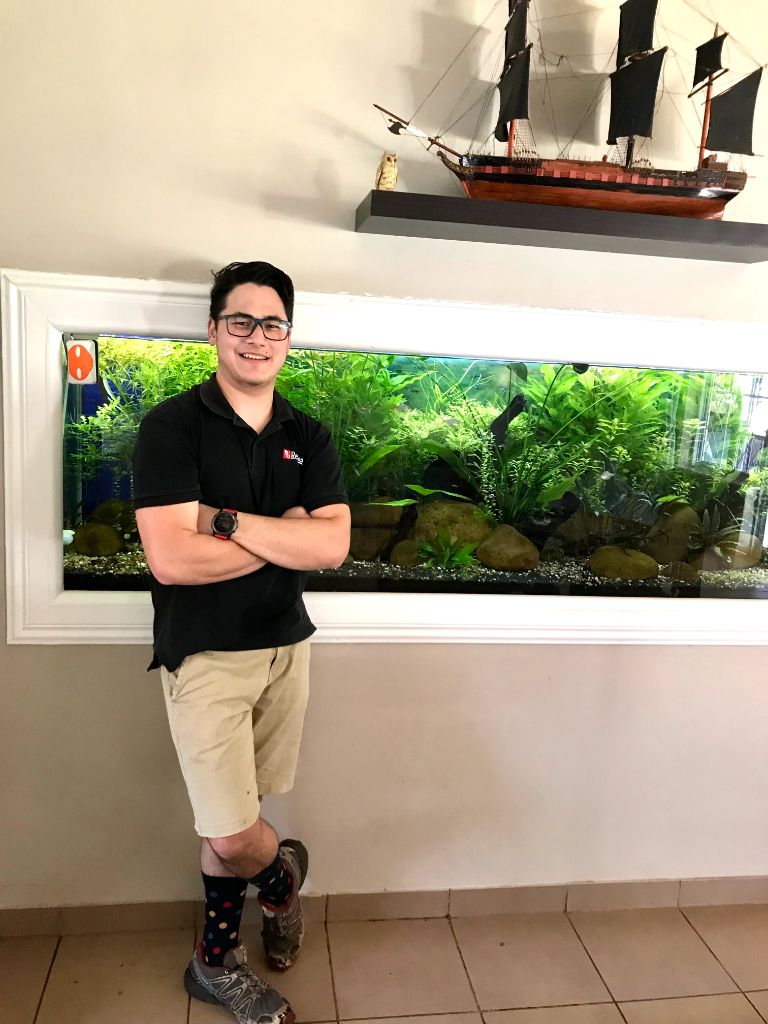 Jordan Sum Yuen with the very first tank that his business helped set up in a Waterfall home.

Fish tanks are making a comeback as people spend more time at home post-Covid. The only problem is that they are finding out that this not as easy as those YouTube videos make out, says Jordan Sum Yuen, the plucky young entrepreneur who founded The-Clean-Up-Crew.

Jordan matriculated at Waterfall College in 2019. When Covid-19 lockdowns scuppered his plans to study further that year, he took a job at Exotic Pets in Hillcrest.

He says a mentor had told him that he had a natural talent for entrepreneurship. When he began fielding queries from customers looking for someone to help maintain their fish tanks, he jumped at the opportunity to fill that gap.

Today his fledgling business not only takes the hard work out of maintenance by doing water changes, water testing and repairs to filtration equipment for tanks and ponds, but also advises people on the choice of products, plants and fish to keep their tanks looking ship shape.

“How I explain it is that this is not a decoration. People need to realise that these are living things. A fish tank is not just water with fish. It is an eco-system and you need to replicate the natural environment and keep everything in balance. They are not self-sufficient.  Many people like the idea but not the hard work.”

His most memorable clean-up was a 26 000 litre tank at a lodge. The majority of the tanks that he cares for are around 400 litres, and he was convinced that the calculations were wrong – until he arrived. His crew took a day to clean it with one member having to don baggies and a snorkel and climb into the tank.

But what Jordan enjoys most is tank installations – either setting up a shop-bought tank or facilitating the design and manufacture of a bespoke tank for a specific home or office space.

He keeps up to date with latest trends. Whereas, up until recently, marine fish were most popular, the latest fashion is aquascaping – which puts the focus on the plants rather than the fish.

“Marine tanks become too expensive. It has also led to many exotic fish becoming endangered in nature because of overfishing to supply aquariums. Our oceans are under threat and it doesn’t make sense to have a hobby that has us stealing from the ocean,” Jordan points out.

As a result, shops are selling a wider variety of plants and experts like Jordan have developed far broader knowledge of which water plants grow best in particular conditions.

“Getting the tank is easy. It’s what you do with it that counts. Aquascaping is not just about putting plants in a tank of water. You need a substrate and to make sure that the plants have the right nutrients and the right light to grow. You have to make sure that there is carbon dioxide diffused in the system. If you don’t, your plants will not succeed,” he explains.

Apart from all the technicalities, Jordan says there is definitely an artistic element in setting up a tank. This includes positioning found objects such as rocks and pieces of driftwood and then placing plants using a gradient of large at the back to shorter ground covers in the front of the tank.

“The skill is in combining different elements. You have to be artistic and have a vision.  With time, everything grows and you can create a natural picture,” he says.

The fish are the last element. “A lot of people get confused because most fish come into a fish shop when they are small and colourful. They usually go for the most unique ones but they are usually the ones that grow up to be the biggest and most aggressive. Then, they realise that they’ve probably made a mistake,” he says.

With more focus on plants, Jordan says that, these days, new tanks are often left to develop without the addition of fish for months. “I guess it’s a patience game,” he smiles.