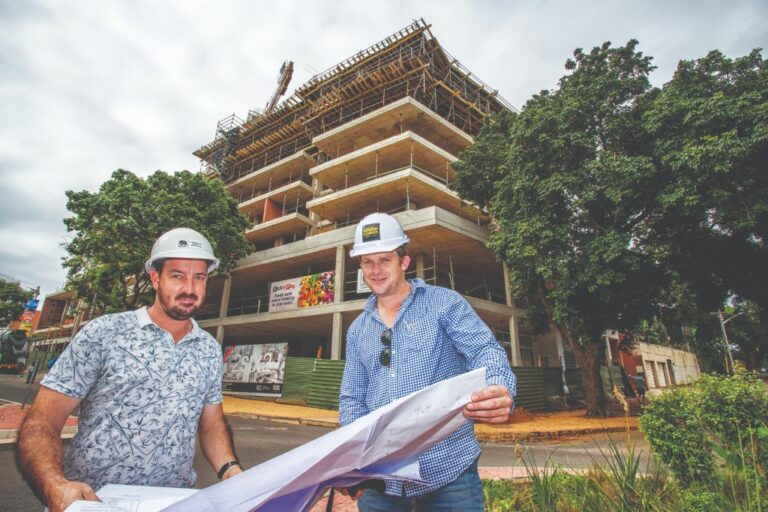 The slick new 11-storey apartment block with office and retail space in Florida Road has given one of Durban’s key nodes a welcome shot in the arm.

The Gough Cooper development – 2SIX2 – on the corner of Florida and Lambert Roads is 70% complete and 90% sold out, with the first residents taking occupation before June.

Gough Cooper’s Jacques Klynsmith says a premium has been put on convenience and efficient use of space in the development, one of the first sizeable residential projects of its kind in Morningside. It promises a significant value add to the neighbourhood’s offering that has been given great lustre by the Urban Lime purchase and redevelopment of key blocks in recent years.

Urban Lime and other property owners in Florida Road have added hugely to the vibrancy of the area and have worked with the municipality to significantly clean, green and secure the neighbourhood.

2SIX2 is at floor eight and has largely taken shape, and aerial photos of the project show great sea and city views. Klynsmith says there are 51 apartments, including 44m² one-bedroomed units (mostly facing Florida Road). There are also two- and three-bedroom units and two penthouses. Many of the units have private gardens and covered balconies and there is a rooftop pool and gym for residents.

Every apartment is fitted out with a SMEG oven-hob and extractor, porcelain tiles, modern kitchens and Grohe sanitaryware, while the building will have biometric access control. Prices fetched are upwards of R31 000/m², which is only a few thousand rand less than what early investors paid at The Arch in uMhlanga.

The residential tower at 2SIX2 sits atop two floors of offices and a 2 000m² retail and restaurant complex, and will include anchor tenants Pick n Pay and steakhouse Butcher Boys.

Klynsmith says the development is a joint venture with Florida Road property owner Rob Goulden in conjunction with Indlovu Construction. “We have gone for modern, sleek lines in an area where a mixed-use development like this will be prized. This part of the Berea is sought after. It has an authentic feel about it because of the old buildings, the history and the infrastructure, like schools.” The development is a stone’s throw from Clifton School.

Klynsmith says many buyers are investors interested in the area because of its easy proximity to the sports precinct around Moses Mabhida Stadium. They were especially encouraged by the prospect of leasing to sportsmen, mainly rugby players now that the Sharks had received a huge overseas investment.

Another key factor was the success of the Urban Improvement Precinct in Florida Road, established in October 2013. It involves 65 commercial property owners paying more than R3-million a year to the UIP, in addition to the rates they pay council. In return, they get access to a local UIP manager, a staff of 19, and the support of UrbanMGT’s management, which runs other successful UIPs in uMhlanga and elsewhere.

Since the UIP was established in Florida Road there have been substantial redevelopments and upgrades that have brought massive new investment and confidence to the area.

Klynsmith and his father, Gert, who passed away late last year, have a history of successful developments in Knysna, Ballito, Montclair, Kloof, and uMhlanga, adding that the next Gough Cooper development will be a 15-unit beachfront site in Ballito.