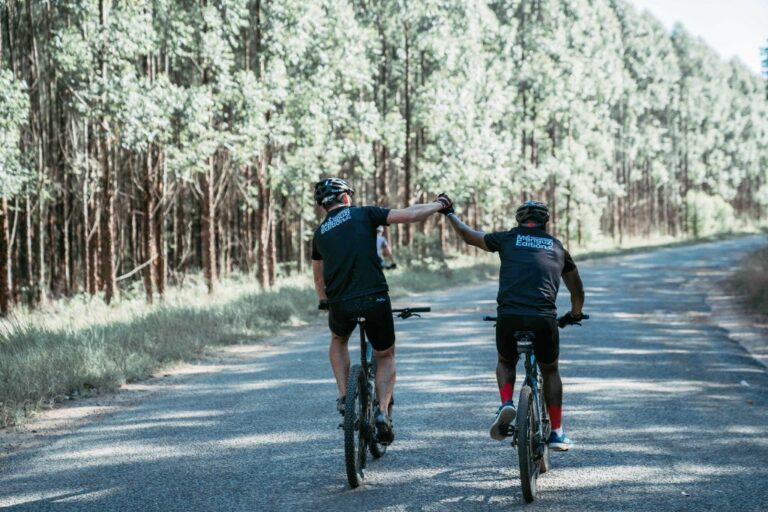 Sport has always been a catalyst for uniting people – the Sport for Lives movement has deepened that connection, and it’s effecting some important changes, writes Anne Schauffer.

A teacher at Hilton College for 13 years, Chris Kingsley and his family witnessed many people emigrating in recent years for various reasons: “Feeling called to stay and not emigrate, then one must stay and make a difference. But how would we actually do something that made that difference? Generally, South Africans want to do so much, but don’t know where to begin, so keep on doing what they were doing.”

Chris was constantly wrestling with this challenge, and then, without trying, a solution presented itself – Jono Kruger, a teacher friend at Selborne College, told him about Tries for Lives. In a nutshell, it worked like this. Individual children in a rugby team would get their friends and family to sponsor an amount of money per try – so the more tries, the more funds raised. But these funds were used in a very specific way: “It was not a simple fundraising initiative – a money transaction – it was about building relationships with local causes in need,” says Chris. As coach of Hilton’s under-15 rugby team, Chris was on board.

“Down the road from Hilton College is an orphanage, Thandi House. I talked to the boys about the Tries for Lives concept, and we went there to meet the children. Relationships were formed, connections were made, and specific needs identified. The money raised was not a general donation, it always had a specific purpose.” Whether it was renovating a building or funding a washing machine, it was a focused initiative.

Over the next few rugby seasons – every try worth a few thousand rand – the under-15s raised about R150 000 for projects at Thandi House. The Thandi House children came to watch and cheer on the boys at their games, and the boys spent time with the children.

Chris is clear: “We are not about the transaction of giving, we are all about heart giving. Money is not the answer. It’s failed before.” The boys were playing with a real, greater purpose which increased their motivation to score tries. The change it effected in them was marked.

Living and working in a privileged environment such as Hilton College comes with a responsibility: “We didn’t want to be ashamed of our privilege, but rather do something with it,” says Chris.

He recalls, “A 15-year-old Hilton boy knocked on my door and wanted to set up a Swim for Lives campaign. Six boys swam for 24 hours and raised R60 000. We all think it’s a money thing, but what really happened was he’d spent about three hours with the orphans at Thandi House and that was life-changing for him. His parents phoned me the next day and said it’s the first time they’d sat down around the dinner table and spoken at length about privilege. Their son was so committed to the children at Thandi House, he didn’t want any Christmas gifts, no big holidays, but rather wanted funds directed there – the experience shifted his heart,” says Chris. “It’s this compassion we want – this will be the generation that makes the difference. These relationships and connections have a multiplier effect.”

Increasingly, Chris was approached by other sports teachers and schools: “They wanted to find out all about it, and how they could get involved. The more we were telling stories of hope, the more people wanted to get involved. It was having a sustainable impact in the community.”

And that’s how Chris became co-founder and managing director of Sport for Lives. A real leap of faith – two actually. He – and his wife – both teachers, resigned from their jobs and started two NPOs.

Sport for Lives is a tool that can empower individuals and communities to be intentional about making a difference. As Chris explained, “You can literally walk round the block, and still achieve a similar outcome.” Tries for Lives morphed into Swim for Lives, Run for Lives, Birdies for Lives, Boundaries & Wickets for Lives and Goals for Lives.

“‘We are the most unequal country in the world – that’s our starting point. That’s our Why,” says Chris. “Sport has the power to change that.” For him, there are enough resources in every community to change the narrative in South Africa. He’s spent a great deal of time visiting schools, sharing the concept: “Generally, most of the schools that I’ve been to, do not have any long-term sustainable plan for doing something in their local communities. It’s often just a once-off collection and handout. Our dream is to take our model across the country, across the world even. Sport for Lives is not the only way to build in a community, but it’s a practical and effective tool to use.”

“I’ve realised that this generation really wants to make a difference, so we’re offering a tool, a solution, to schools – there’s also a coaches’ manual, which is very practical, and provides questions that the coaches can talk through with their students. We often say to our students ‘make a difference’, but how do they do this? We’re so busy as adults, we don’t guide them in this. This kit does that, and because as teachers, we know how busy teachers are, we’ve made it really quick and accessible, so it’s not overwhelming.”

Essentially Sport for Lives is not a sporting initiative: “We’re a movement,” says Chris. “We’re conduits, similar to a Robin Hood mindset, empowering people to start their own campaigns in a community and solve their own problems.” In addition, Sport for Lives is slowly building relationships with several non-profits around the country, so – with the credibility of being part of our network – those NPOs can also approach schools and ask the school to do a campaign for them.

Four provinces, 20-odd schools, 20 non-profits, and around R1,5-million raised – in under a year. This has been achieved with collaborations with organisations like the Kolisi Foundation, the Sharks under-20s, and a number of others. High-profile personalities have the crowd-power – they set an example. Sport for Lives has a network of ambassadors, and Chris is focused on expanding that; likewise on increasing his base of strategic partners who’ve contributed valuable seed funding to the movement.

Sport is more than a game. It’s a voice. Chris is using his – and showing others how to use theirs effectively. “We seek to turn athletes into activists, inspiring them to play for a higher purpose,” he says. “A heart change is how we change South Africa, one game and one story of hope at a time.” *