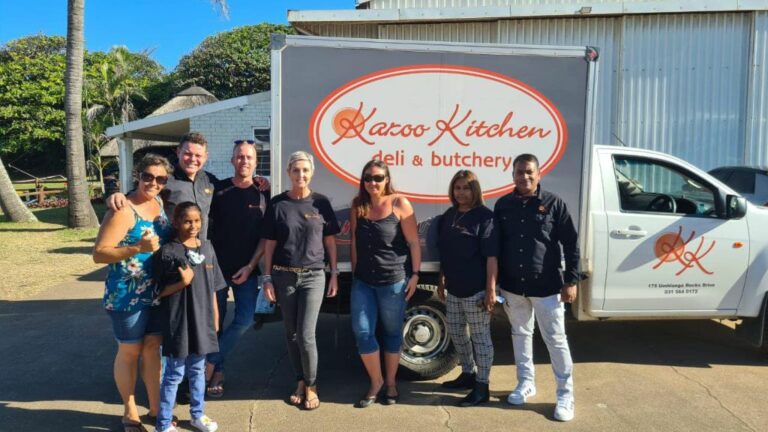 In the midst of the untold hardship and trauma of the recent floods, emerged a powerful group energy and teamwork – one of the heroes was the Rebuild KZN Facebook page.

Brainchild of Tatum Ridgway, the Rebuild KZN Facebook group once again became the perfect platform for crisis relief – this time, the flood relief at Virginia Airport. Twenty-eight-year-old Tatum is very swift to knock any idea which places her at the forefront of the action. She was one of many volunteers who played their part for KZN. Tatum’s a Grade R teacher at St Henry’s Marist College, and she chatted to her little charges about the amazing spirit and volunteers at Virginia: “They are like real-life superheroes,” she told them. “Like we see Spiderman and Superwoman, these are people doing real-life things to save other people.”

The Facebook page Rebuild KZN was sparked by the July riots: “I was going insane with all the negativity, and decided to turn it around,” she explained. Within days, 28 000 people had joined in. She refers to it as “light in a time of darkness, hope in a time of despair, and positivity in a time of negativity”. The platform also became a perfect ‘message board’ for those who needed help – or those who were offering help – and it pulled people together.

Enter the floods: “I saw a post on the Rebuild KZN page about Virginia Airport, and how desperately the rescuers needed supplies. I used the page to call for donations, and was overwhelmed by the goodness of people from all walks of life.”

Tatum’s main role was posting on Facebook, sourcing donations, shopping and collecting. Boyfriend, Brendon Fleming, was by her side, doing whatever he could, as were many, many others. Tatum is adamant: “I didn’t start the work at Virginia. The team was headed up by Lauren Izaaks, supported by myself, Dean Grobler, Mandy Hawkins, Sonja Horsley, Lynette Louter, Malena De Robillard, Hannah Sinnicks, Triveshan Naidoo, and the three sisters of Brenda’s Angels – Tammy, Lindy-Leigh and Kirsty – who cared so brilliantly for all the K9s needs. We all had our roles, some just evolving, like the humanitarian side which Lauren managed – we envisage that being ongoing.”

Donations poured in from all quarters, from corporates to individuals, in the form of cash or specified goods.

There were two arms: all supplies coming in from the community fed the rescue teams, but also, increasingly, contributed to the humanitarian aid drop-offs: “Food menu rosters were drawn up and compiled – we then reached out to suppliers for meals, water, Energade, Rehidrat and Slow Mag for the rescue teams. Dr Rafiek Rodriques set up a tent at Virginia, complete with a medical team offering massage and physio services to the various exhausted rescuers out in the field, day in and day out.”

On the ground at Virginia, each one of these people were just local community volunteers coming together as a team, and literally making a world of a difference. “And through all of this,” says Tatum, “you’d think the mood would be negative and stressful. But not at all. The vibe was amazing. The rescuers are so positive, and so grateful. Everyone was working towards a common goal.”

When she wasn’t posting or fundraising, Tatum was deeply involved in gumboots: “We raised funds, then approached suppliers. They were brilliant – Neptun Boots sponsored 67 pairs!” And then there were spades and much more – the list of requirements was specific to the gruelling tasks at hand, and met by willing donors.

Tatum says every donation counted: “We were blown away by the compassion shown.” Groups such as Famous Brands were there through it all: “Their Wimpy coffee station made between 400 and 500 cups of coffee a day, and they provided pizzas for dinner and burgers for lunch – they were amazing. We Are Food donated so many meals, as did a number of Spar outlets. Someone always stepped up when it was needed.”

Tatum laughs, “Even the schoolchildren played a role. You’ve no idea the smiles that broke out on the faces of exhausted rescuers when they read the heartfelt messages of support from the kids.”

Every bit, every donation, every effort counted. This was community in action.