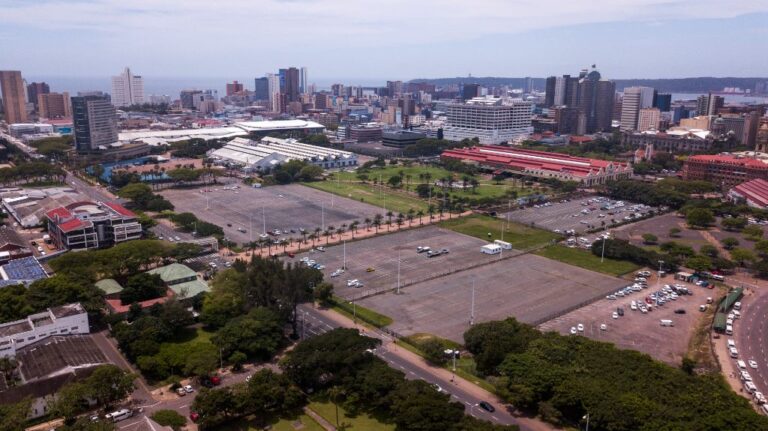 eThekwini Municipality wants to sell the city’s strategic Virginia Airport for re-development while acres of plumb real estate lie vacant. What is the city’s plan for this land that could revitalise the city? Lyse Comins reports.

Economists, developers and concerned stakeholders have questioned the logic of the eThekwini Municipality’s move to shut down Virginia Airport to make way for a mixed-use luxury development, while ignoring other key sites around the city.

Virginia Airport hums with aircraft ferrying crew to ships and emergency personnel to accidents. Charter flights for cargo and passengers operate from there, as does a pilot training school and a helicopter that inspects the fuel line between Durban and Johannesburg every day.

Virginia Airport was used extensively during the July 2021 riots to fly in essential services.

On the other hand, strategically located municipal-owned properties have been neglected for years including The Pavilion site and the former Star Seaside Children’s Home on the beachfront, as well as the former Durban Drive-in near North Beach.

The Durban Centrum site near the ICC is another example, as is the old Stables and Hoy Park site opposite Kings Park Stadium.

Economist Mike Schussler – who previously produced an economic report entitled The KZN Barometer – said it did not make sense to shut down a working airport. He said the city should focus rather on improving its facilities as every city should have two airports. Johannesburg has Lanseria and Cape Town is in the process of developing the new Cape Winelands Airport.

“Regardless of the other sites, Virginia is working and paying for itself in terms of jobs – as well as being an alternative transport route to fly in medication when needed. I would rather be thinking about how I can make use of this infrastructure and improve it to invest in capital and the future, but for some reason, they just want to make money,” Schussler said.

Schussler said the airport could be used to attract foreigners for pilot training and expanded to offer tourists helicopter flips over the city. He said it was possible that a potential developer had set its sights upon the plum real estate that runs along the North Coast through upmarket suburbs.

“There is certainly something wrong there. I really think something is fishy, if it is already working then why do they want to close it down?”

Sivandra Govender, operations executive at TUHF, which finances commercial property developments, is passionate about ensuring Durban gets its fair share of investment.

His firm has already provided financing for several developments in the inner city aimed at rejuvenating the CBD and creating affordable housing.

However, he said the pace of development was excruciatingly slow, and it would make sense for the city to focus on getting its development processes functional before tearing down a working airport.

“I want Durban to get its fair share of development but if we can’t get plan approval and electricity supply to site it’s a problem. So, why go and shut down something that is working to propose a development when you can’t keep your own house in order?

“I have sites with millions invested and we do not have power supply yet because it (the city’s development process) is totally dysfunctional at the moment. We get a lot of lip service from the council about what we could do but when it comes to delivery they don’t seem to be interested in investment,” he said.

He said one example was a development in the CBD in Maud Mfusi Road, an old abandoned and previously hijacked six-storey building that one of his clients had revamped into 100 residential units.

“They have been waiting for power supply for over two years. And they (the city) don’t give you reasons. The developers have to start paying us back and sit with problems because they have to make alternative arrangements and borrow,” he said.

eThekwini Municipality had not responded to questions regarding the state of the development of the key sites, despite being pressed for answers over a three-week period before publication.

According to earlier media reports the city had announced in January 2022 that it intended to develop the Durban Centrum site in the Gugu Dlamini precinct and would be calling for “expression of interest” applications from investors. One of the proposals is for an almost R10-billion development comprising a mixed-use precinct.

In 2015 the former Star Seaside Children’s Home on North Beach was earmarked for social housing. The property still stands derelict.

In 2020 the Durban High Court ruled that the eThekwini Municipality could take over the Stables Lifestyle Market and evict hundreds of trader tenants. However, two years later, the site remains undeveloped, although a municipal spokesperson told the Daily News the city planned a revamp.

Next door the city evicted KwaZulu-Natal Track Cycling in June 2019. Dave Henry, former chairman of Berea Rovers Club which occupied part of the site, raised concerns about the demise of sports clubs.

“Sporting clubs were formed to provide grassroots opportunities. The city granted leases that enabled capital investment to be recovered over a realistic period of 30 years. These clubs provided facilities at no cost to the city, they created employment and promoted tourism,” he said.

“The ruling party did not understand this and set about weakening these structures by putting the clubs on to month-to-month tenancy thereby limiting any long-term development.”

Henry said Berea Rovers – which dated back to 1884 and had 1 500 plus members offering rugby, cricket, hockey, squash, road-running and canoeing – had been “destroyed this way”.

“With R10-million assets and physical improvements, the club was forced to close due to the city’s refusal to enter into a long-term lease,” he said. A soccer academy in partnership with UK based Liverpool Football Club was proposed for the site. However, the project did not materialise.

Property development expert Stefan Botha of Rainmaker Marketing said: “The property development industry would be hugely supportive of more engagement between the public and private sector in terms of prioritising developments that are catalytic in nature, to uplift communities through employment and rates income,” Botha said.

He suggested a closer working relationship to facilitate partnerships and increase development.

“Roads are a major issue where we as developers are having to fund a lot of the roads because there’s no money left. There’s also a big problem with sustainability and in particular rates as eThekwini has very, very high rates and we need to look at a solution for the city to reimburse developers, especially if we are spending a lot of Capex upfront on bulk services and roads on their behalf,” he said.