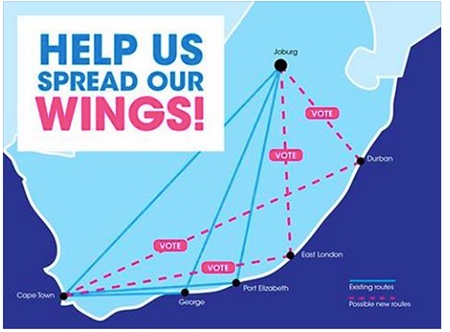 FlySafair Toys with the Idea of Adding Durban

FlySafair started selling tickets in July last year before taking to the skies in October. In just under 8 months they have carried more than 400 000 passengers. Over a quarter of those tickets had been sold for R499 or less.

“From research conducted, we have seen that fares have decreased by as much as 39% on certain of the routes which we fly, since we launched flights last year,” explains Kirby Gordon, Vice President of Marketing for FlySafair. “Whereas routes that we don’t currently fly, such as between Durban and Cape Town or Johannesburg, have either remained the same or increased in price.”

Should Durban win the voting, the airline states that it would look at introducing flights  between Durban and Cape Town from as little as R499, while flights from Durban to Johannesburg could start at R399. This is a far cry from the present average ticket prices of between R1581 and R2033 on other airlines.

However, judging by the votes already generated, this opportunity for lower fares may well slip away for the Durbanites. As things currently stand, the stats indicate that the East London to Cape Town connection is by far the preferred option, which is leading the polls with an overwhelming 67% majority.

“We believe that it would make sense to add Durban as a destination,” says Gordon, “but if we work on the feedback we are receiving from the public, the demand for our service may not be there. The poll is open until the 20th of June, and we look forward to seeing the final results.

Think Durban deserves to be the next FlySafair route, then make your voice heard and vote for Durban via the FlySafair website, Facebook page or click here.