Give joy, give a toy 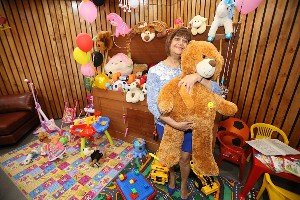 East Coast Radio’s Toy Story with Game initiative is once again spreading joy around the province.

East Coast Radio’s Toy Story with Game initiative has begun, aimed at giving a new toy to every child in government hospitals, state orphanages and crèches, and children’s homes that rely on government funding. For many of these little ones, these are the first new toys they would own.

Funds donated to the campaign will go towards buying food parcels for child-headed households in KwaZulu-Natal, to help see the children through the December holidays until school re-opens.

For many of these children, a school-sponsored meal is the only guaranteed meal of their day. The food parcels will help them make sure they don’t go hungry during the long end-of-year school break. Each food parcel is valued at R350 and contains items that can feed a family of four to six for around five weeks.

Last year, East Coast Radio’s Toy Story with Game initiative touched enough hearts in KZN to inspire the donation of 43 000 new toys and R1.4 million in cash. 100% of these contributions went towards helping ill and underprivileged children across our province. The toys helped lift spirits and warm little hearts while the money bought 4100 food parcels for child headed households.

Speaking at the launch of the initiative at East Coast Radio, the station’s general manager, Trish Taylor said, “Toy Story is a deeply meaningful project for East Coast Radio. With the help of our listeners and key partners, we are able to help the poorest of the poor in our community and make a real difference in their lives. East Coast Radio and Game – our key sponsor, is committed to building a better society for KZN.”

Now in its 14th year, the initiative is once again calling on the people of KZN to help make a difference. ECR presenter Zaba, who hosted the launch, described how her first toy, a doll named Sibongile, lit up her life and was her friend, companion and confidant. To this day, Sibongile still has a space in Zaba’s room.

“Giving a new toy to a child who is sick in hospital and who has possibly never owned anything new in his/her life, is a great way  to let them know that somebody still cares about them,” says Zaba.

East Coast Radio’s Toy Story with Game campaign wraps up on 17 December 2014. As has been the tradition over the past years, the campaign will move to Newcastle on 24 October 2014, for a live outside broadcast, giving residents and businesses in Northern KZN the chance to physically donate toys or make donations.

The campaign’s Corporate Day Challenge moves to The Pavilion this year. From 6am to 6pm on 21 November 2014, celebrities and personalities will team up with East Coast Radio presenters to man the telephones, as the people of KZN pledge towards the campaign. Last year, the generous residents of our province helped raise more than R1 million during the East Coast Radio Toy Story with Game Corporate Day Challenge.

You can help make a difference by donating a new toy or making a cash donation at selected Game stores or at East Coast Radio’s HQ in Umhlanga. Cash donations can also be made online at www.ecr.co.za.