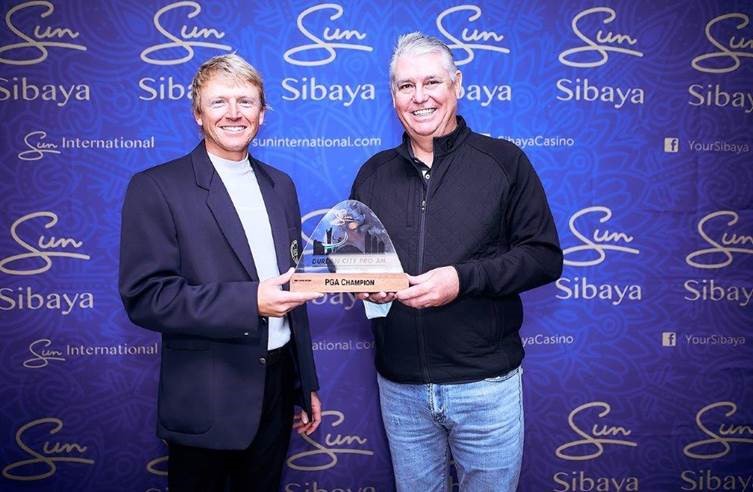 Last week, Greg Bentley stepped onto the Mount Edgecombe Country Club golf course, taking his love for the sport onto the greens, to later walk away with the title.

Bentley, a golf coach, walked away with the honours after shooting a final round of 34 points to stay 4 points clear of Blanche Lamprecht and Christo Roos and Willem Lindeque at the Sibaya-sponsored event.

Tournament Director, Warren Rudolph, said that Bentley was a deserved winner, playing the most consistent golf over 54 holes with scores of 39, 38 and 34. “Greg is a great supporter of the event, and he has already indicated that he would be back next year to defend his crown.”

The event drew some of South Africa’s top PGA Professionals on the National Order of Merit and familiar names in golf, including last year’s defending champion Kevin Stone, Rudy Whitfield (Glendower GC), JC Coetzer (Sun City), Sikhumbuzo Mthetwa and Eric Mhlogo, all of whom are great supporters of these events.

Bentley said “the point was to go out onto the course and play with having fun in mind. I am very happy with being able to walk off with the title for this year, and the trophy will have a proud place in my cabinet.”

Bentley is a Titleist performance institute qualified coach in Golf, Junior, and Power Level 2, based in Johannesburg at Kyalami Country Club. He is passionate about unlocking the potential of your game and the pure joy of this ‘game of life’ called golf.

In the Team alliance competition including the pro and 3 amateurs, it was a tightly contested affair with just 1 point in it between first, second and third position. Here are the winners:

In the amateur’s competition over 36 holes in an individual stableford format, the top 3 players emerged

In addition to this year’s event, we included an extra 18 hole shoot out for the amateurs at the Woods Course on Wednesday and our top 3 players were announced and took the honours.

Melville Vogel, Sun International’s Regional General Manager said, “the pros were great at engaging with the amateurs assisting them with their swing”. He points out that the players also took the opportunity to create and forge relationships as they spent time together each day on the course.

“We had a really good mix of players, with the tournament being open to everybody.”

​ The second SunBet Durban City Pro-Am was held from 12 to 15 June.

Raptor Rescue – Be Part of the Solution