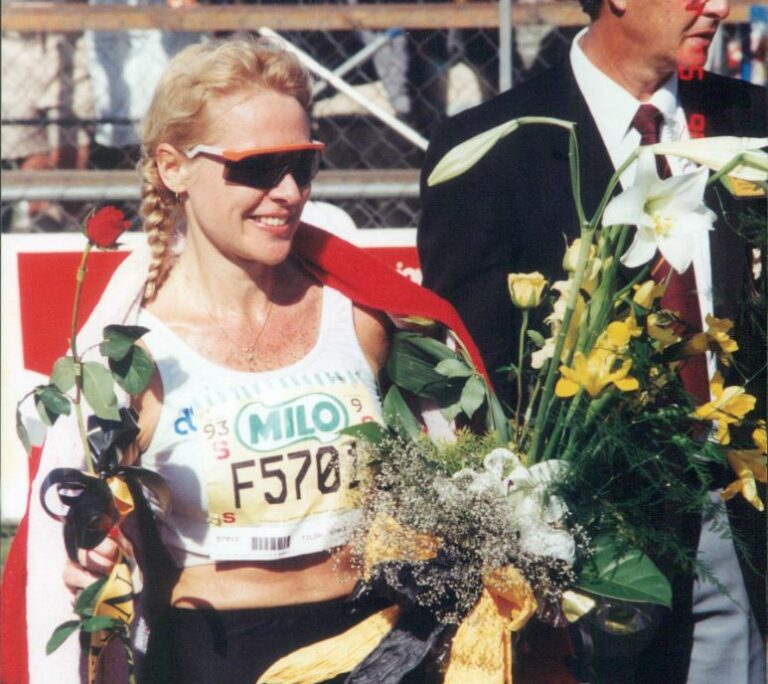 For legendary marathon runner Tilda Tearle – runner of 30 comrades marathons, 10 times in the top 10 – taking the decision not to run this year’s comrades took way more courage and soul searching than the decision to run her first, writes Anne Schauffer.

Tilda had a bucket list for age 60. Unlike most of us, it went beyond having a large festive birthday party: she wanted to renew her wedding vows for her 40th anniversary, run six 21km races as a 60-year-old, swim the Midmar Mile, do a tandem parachute jump, and run Comrades 2020. First four, big ticks … latter two, longer stories.

Running for Tilda began on May 31, 1983 – a crystal clear memory: “It was Comrades Day, and the very first time they televised it. I turned to husband Clive and said, ‘Next year I’m going to run Comrades’” … then added, “‘And I want to go for a run right now’.” Clive not only thought she’d lost the plot, but added that she couldn’t go for a run now, as people would think they were crazy to run on Comrades Day. Tilda had never run before, neither had Clive – they just weren’t runners: “I played hockey a bit, and I did some tap dancing,” smiles Tilda. Three kilometres later … that was the start of what Tilda describes as her “big love- hate relationship with running”.

In 1984, after a year of running, Tilda discovered she was a pretty decent runner. As she’d promised, she entered her first Comrades: “I did quite well,” she grins. “My two younger sisters had boyfriends running the race, and I beat both of them!”

Within three years, she ran silver and came 10th. She’s been in the top 10 a record 10 times – three golds, seven silvers, 13 bronzes, one Bill Rowan and six Vic Claphams. More medals than one mantelpiece can handle.

For the world, 2020 was the unknown and unthinkable arrival of Covid. For Tilda, it heralded more than her 60th birthday, a cancelled Comrades, Covid and lockdown. She found a pea-sized breast lump: “I was pretty sure it was a cyst that would ‘just go away’, but still, I went for a mammogram. Visiting healthcare facilities during Covid was no joke.” The short story was that in a sense, Tilda took charge of her own treatment, just as she manages her running – she’s mentally strong in a quiet, determined way.

There was a general sense this was not an urgent case, and after the needle biopsy – around the lump, not into it – showed up nothing sinister, it was suggested she wait until after Covid to have the lump removed. “My gut told me the lump must come out now,” she says, “I chose a surgeon, and once again, even though ‘it didn’t look sinister’, I had it out under local anaesthetic so the recovery would be quick and I could go home same day. I went home with ‘No need to see you again, stitches are self dissolving’.” Two days later she received the call that the lump was malignant, and a wider cut would need to be made. In she went, and once the results were in, there was no further evidence of the Big C.

All during Covid, Tilda ran around her yard and driveway for a minimum of 45 minutes a day. Every day for her 20 radiation treatments, she ran and ran. She laughs, “For the planning and scanning, to help the radiotherapists, they draw on your chest with a semi-permanent purple ink marker, not to be washed off, so no showers. But with my running, I sweated off all their nice drawings. I kept having to say, ‘Sorry I went running, you’ll have to draw some more’. I think they were very happy to see the last of me.”

Tilda likes to describe her breast cancer journey as a “Comrades Up Run”.

For Tilda, running is and always has been, only about her: “It’s simple – I just like running.” Never a professional runner, Tilda’s always worked – no privilege there: “I always said I did it for myself, never for the money.” Not that there was any prize money then: “The year I won, I received R2 500 from my shoe sponsor Asics, and a bunch of flowers and bottle of champagne.” Not only no prize money, but in the 80s, not many female runners and zero female running gear: “I ran with a bunch of guys, largely because I could keep up with them and there were not many women running Comrades. I wore boy’s shorts and things like sport’s bras didn’t exist – I taped myself up with micropore to stop the chafing!” she laughs.

Tilda’s journey to the podium was as much a story about her mental strength as physical: “I came fourth, then third, then second, then first. I was not going to come second twice. As I stood on that starting line, I knew I would win.” Just as she knew she’d get her first silver in 1986, no matter the opinion of a few sceptics.

Tilda doesn’t stress, nor succumb to pressure: “The year I won, it was just becoming fashionable to have a sport’s psychologist. My response to one who offered their services, ‘No thanks, I’m my own psychologist’. I’m in a good head space when I run. I’d never start and think negatively, or with the thought I wouldn’t make it.” Tilda would definitely be a fan of Rich Davis’ comment: Long-distance running is 90 percent mental and the other half is physical.

Tilda has started 32 Comrades and completed 30. During the 2013 up run, after running 60km she landed up in an ambulance and was admitted to hospital.

She’d started the race with the tail-end of a chest infection. In 2016 she was injured and couldn’t train properly, but took a chance and lined up. She missed the Pinetown cut-off time and finished in a so- called cut-off bus.

Tilda doesn’t own a Garmin or run with a watch: “I know my own body. I know what’s going on. What am I going to do if it says I’m running too slowly? I have a stopwatch now because I tend to commit these days to running for an hour or three, rather than a distance.” A loud laugh: “It’s a R179 stopwatch from Mr Price. No one’s going to steal that.”

Road safety is one part of Tilda’s decision not to run the Comrades this year. Not security, but safety in terms of road conditions: “I’m up every day between 4.30 and 5am, and it’s dark. Running on the Berea with the state of the roads and its potholes, and streetlights not functioning, is risky.” For those who work, the bulk of the training for Comrades this year is in the dark – so poor road conditions are very restrictive.

One thing is certain for Tilda: “If you want to do Comrades, you must be in the headspace to do it, and I’m not. I entered in 2020 with the full intention of doing it as a 60-year-old, but I’m 63 now, and you have to listen to your body.” Bottom line, “I’m just not feeling the love for Comrades,” she smiles. “It’s time to end that love affair; to write the closing chapter of my Comrades book.”

But if you think you won’t see the familiar figure of Tilda Tearle on the promenade pounding the beat, you’d be dead wrong: “For the rest of my life, I will get up and walk or run. I have to – I love it, it’s who I am.”

If you’re running Comrades for the first time this year, it’s a day in your life that will be etched in your memory forever. When you cross the finish line, it will be a magical experience. Ninety kilometres is a very long way – you will go through good patches and bad.

Don’t succumb to a bad patch. Walk through it. Gather your thoughts and keep going forward. Comrades is not just another race. You can’t redo it the next week. On the day, don’t do anything or take anything that you haven’t tried during one of your training runs.

If you’re getting a lift to Pietermaritzburg on the morning of the race, make sure the driver leaves early. Stressing in a traffic jam is not a good start to a long day. Watch out for uneven surfaces as you walk to the start. You also need to have a plan for the finish.

Beforehand, select an exact spot where you’ll meet whoever is taking you home.