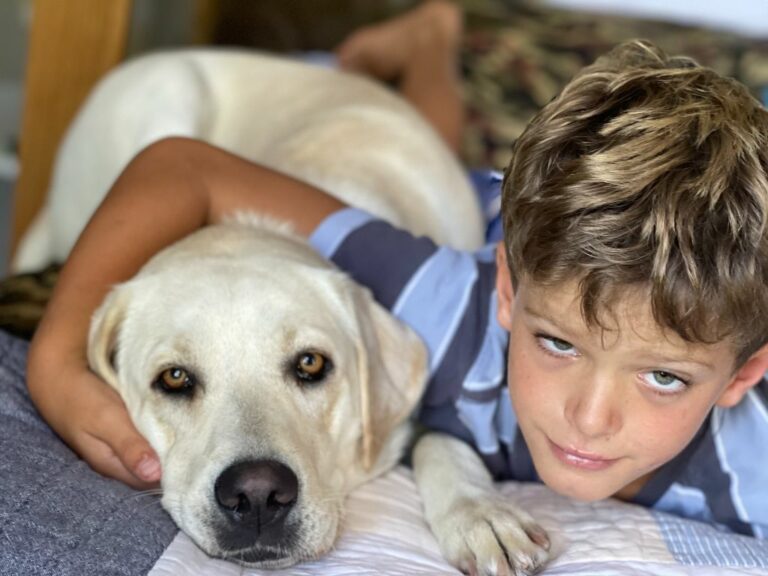 For an autistic child, social interaction is very difficult. For Jack Haynes, having Enji, his autism support dog, has not only given him a forever best friend, but one who loves and accepts him unconditionally, writes Anne Schauffer.

Dog lovers know what dogs are capable of, what lengths they’ll go to for their other half, and how powerful and supportive their unconditional love can be. A year ago, the Haynes family of Mount Edgecombe had two dogs. And then came three. Enji.

Jack Haynes is nine years old, a twin to sister, Molly. Jack is autistic – diagnosed as “moderate” – is verbal, adores fishing, and is in Grade 3 at Livingstone Primary School.

Jack’s mom, Brenda, had no idea there was such a thing. Few do: “I generally don’t look at Facebook first thing, but on this particular morning I did. Since Jack’s diagnosis, I’ve spent a great deal of time researching autism, and connecting with other parents who’re on the same journey. On that particular morning, this Facebook site announced that applications had just opened for Autism Support Dogs. I had no idea what that was, so I researched it.”

Brenda says laughingly, “I’m a self-confessed procrastinator, but not that day. I submitted my application then and there. No simple task, as it was a sizable document, about 15 pages. But their attention to detail was so impressive.” By the end of the day, applications were closed – it was full.

Autism Support Dogs fall under the auspices of the South African Guide Dogs Association for the Blind, an organisation that not only provides dogs for the sight-impaired, but also for those who have physical or developmental needs, or those of orientation and mobility. They train Guide Dogs, Service Dogs, and Autism Support Dogs (ASD). Head of Marketing, Nadia Sands, says for the ASDs, they only take 30 applications every two or so years. Chat to her, and it’s very clear why.

The resources needed to train these dogs are extensive – there’s an inordinate amount of time and professional input required, but most importantly of all, is identifying a dog with the right temperament for that role, then matching the dog’s personality to that of the individual.

What temperament is needed? Nadia explained: “The breeds we use – Labrador, Golden Retriever and Lab X Retriever – are generally placid and social dogs, but for ASD they need to be particularly gentle and placid; a temperament which isn’t upset by noise or meltdowns often associated with autistic children. We only get one or two out of a litter.”

For an autistic child, the social and emotional impact of having a support dog can be profound. Among other invaluable attributes, Nadia says, “They provide anchoring (which stops the child from bolting), and companionship for children who are often lonely due to their autism.”

Brenda won’t forget that phone call. Her application was successful. Someone would be coming down to interview her, husband Andrew, and Jack – and spend a morning with them. Brenda says, “The level of attention to detail that they pay, is unbelievable. The patient hours that specialist trainer, Vincent, spent with us… frankly, it blew my mind. He had the facts but now needed to experience Jack’s reality. He spent hours talking to us all, walked around the neighbourhood with Jack to ascertain how fast he walked; wanted to know about Jack’s sleep patterns, and whether he came to us in the night. He needed to know everything so he could match the right dog to Jack.”

Jack has an eye condition known as Dwayne’s Syndrome, which affects the peripheral vision of his right eye. Service Dogs are normally trained to walk on the left side, but in this case, the dog would learn to be on his right, preventing him from bumping into things.

Brenda remembers Jack’s reaction to the first photograph sent to them of Enji as a pup: “She has such beautiful eyes,” he said. And she does.

Brenda was designated the primary handler, and prior to Enji’s arrival, attended a week’s online training lessons (usually in person, but Covid…).

Seven months from application, Enji arrived. Vincent spent two weeks with the family, providing daily sessions to equip the family and the dog with the requisite skills. It’s important that Enji doesn’t bond too closely with other family members, so Vincent had techniques to ensure that Enji and Jack became a team. Brenda said, “The girls – his sisters – could see the happiness that Enji brought to Jack, and didn’t want to break that – everyone respected the role Enji would play.” And Jack is the only one who feeds her and gives her treats.

Vincent also went with the family to all the public places like their residential estate restaurant, tennis lessons, the vet, the golf driving range and so on, also paving the way for the dog to be accepted as an Assistance Dog in places that normally prohibit animals.

Brenda says it’s been a game-changer: “Since Enji arrived, it’s impacted on the entire family. Our home is far calmer, and even though Jack has three siblings, he always has a playmate in Enji. Enji goes fishing with him, does the daily school drop-off and pick-ups, and lies comfortingly on his feet when he’s being tutored in the afternoons.

“Enji sleeps with Jack, and since her arrival, Jack doesn’t come through to us at night. When he wakes, he has the comfort of Enji, and that soothes him to sleep.”

Nadia described one of the major advantages of an ASD, although Brenda says this hasn’t been applicable to Jack: “Autistic children have a tendency to bolt from situations in which they feel overwhelmed or frightened. These dogs wear a harness with a special handle and band strap attached to it. The special handle is for the child to hold on to, while the band strap is wrapped around the child’s waist. The parent as the main handler, has the lead for control purposes. In a situation where the child would usually bolt, the dog stays still, anchoring the child. For some reason, autistic children are happy holding on to that lead.”

Autism Support Dogs learn to apply deep pressure to calm a child: “When Jack is having a meltdown, Enji puts her head firmly on Jack’s lap – that pressure calms him. Likewise, if he’s crying, Enji snuggles up to him and comforts.”

Brenda says, “Enji is Jack’s best friend. It’s hard for autistic children to have or make friends. They have very few, if any, and withdraw into their own world. Enji acts as a social facilitator, a magnet to other children. The neighbourhood children come over, curious about Enji, ask Jack questions about her, interact with him, which in turn, builds his confidence.

“Bottom line, Enji is Jack’s forever friend who loves and accepts him unconditionally.” *