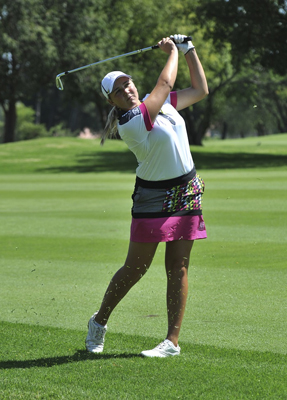 Almost a year ago Ivanna Samu began a run of form that has seen her claim several major titles in one of the most dominant displays in South African women’s amateur golf to be seen in years. She won the Sanlam South African Women’s Amateur Championship at her home club of Ruimsig, and she will defend that title when this year’s tournament begins at Kloof Country Club in KwaZulu-Natal this Sunday.

In March, Samu won the A Division of The Els Family Tournament on South Africa’s biggest junior golf series, beating the boys as she claimed the title by four strokes with a round of 65.

Samu has had a solid grip on the number one position in South African women’s amateur golf, and it harks back to the kind of dominance Ashleigh Simon enjoyed at her peak.

Since Simon, Nobuhle Dlamini and Kim Williams have been similarly impressive figures in South African women’s golf. But none of them have yet been able to turn their stellar amateur careers into equally strong professional careers.

It has instead been Lee-Anne Pace, a golfer whose amateur pedigree didn’t match those of Simon, Dlamini and Williams, who has been South Africa’s most successful professional since the days of Sally Little.

As Samu approaches another major amateur title in KwaZulu-Natal, there is a definite sense that she could be the complete package of a strong amateur career flowing into a successful professional career as well. She drives the ball a long way and is a physically impressive player.

“She is definitely something special,” says her coach Graeme Francis, who has helped her raise her work rate significantly over the past few months.

According to Gary van Loggerenberg, Sanlam Sponsorship Manager, Samu’s development is exactly what one of the longest-standing sponsors of amateur golf has sought to help fuel. “This is all about creating a platform for our rising stars and investing in the youth of South Africa, and long may that continue,” he said.