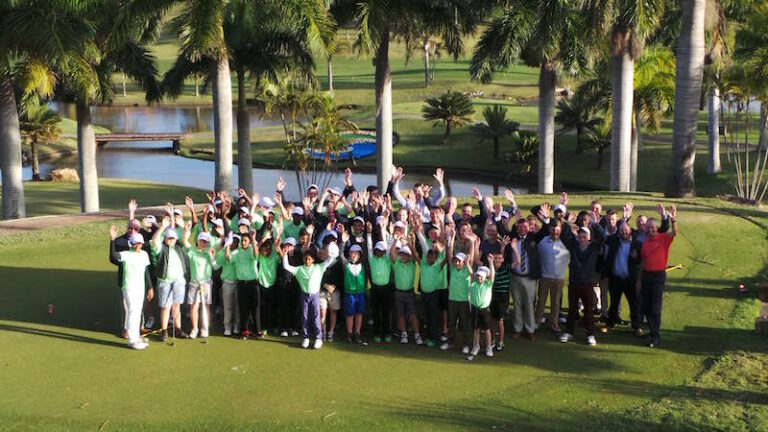 The junior golfers and professionals from the PGA of South Africa’s KZN Region who took part in the Junior Pro-Am at San Lameer Golf Estate. Credit: Loraine Miller.

KwaZulu-Natal junior golf has received a tremendous boost thanks to the fundraising efforts of the PGA of South Africa’s KwaZulu–Natal professionals as well as support from former professional Mark McNulty.

The local PGA professionals recently hosted their annual KwaZulu-Natal PGA Plate at San Lameer Golf Estate, and this year combined the event and fundraiser with a Junior Pro-Am prior to the main pro-am fundraiser that raised an additional R45 000 for future regional projects.

“Last year we raised about R30 000 and this year the committee decided that we would put this back into local junior golf. So we decided to hold the Junior Pro-Am as part of our tournament, and the feedback we received from the kids and parents was amazing,” says Jason Bird, Chairman of the KZN Region of the PGA of South Africa.

About 50 junior golfers from in and around Durban as well as from the province’s South African Golf Development Board (SAGDB) chapter were invited to play alongside a PGA professional in the pro-am.

“We funded the whole experience for them and we had such a diversity of kids with handicaps ranging from 3 to 30.

“We wanted them to experience what it would be like to play as a professional, so they all walked the course and had an official caddie. And we had an official prizegiving.”

This is the third year that the KwaZulu-Natal region has hosted such a fundraiser, and it has now attracted the attention of McNulty.

“Mark has a junior foundation at San Lameer. This year he kindly sponsored the costs of the PGA professionals who played in the Junior Pro-Am. Next year we are hoping to get him to join us for a junior golf clinic during the tournament.

“The entire event surpassed all of our expectations. We raised R45 000 to invest in another local golf project in 2017. We have such a great PGA committee in KwaZulu-Natal and I think this event was a proud day for all of us,” says Bird.

The KwaZulu-Natal region certainly has performed well over recent months. Meyer du Toit, the Golf Director at San Lameer, was this year named as the PGA of South Africa’s Professional of the Year, while Kloof Country Club’s Kate Brett-Castle was named the PGA of South Africa’s Apprentice of the Year, and in May, Mount Edgecombe professional Johan Smit won the PGA National Championship presented by Diners Club.