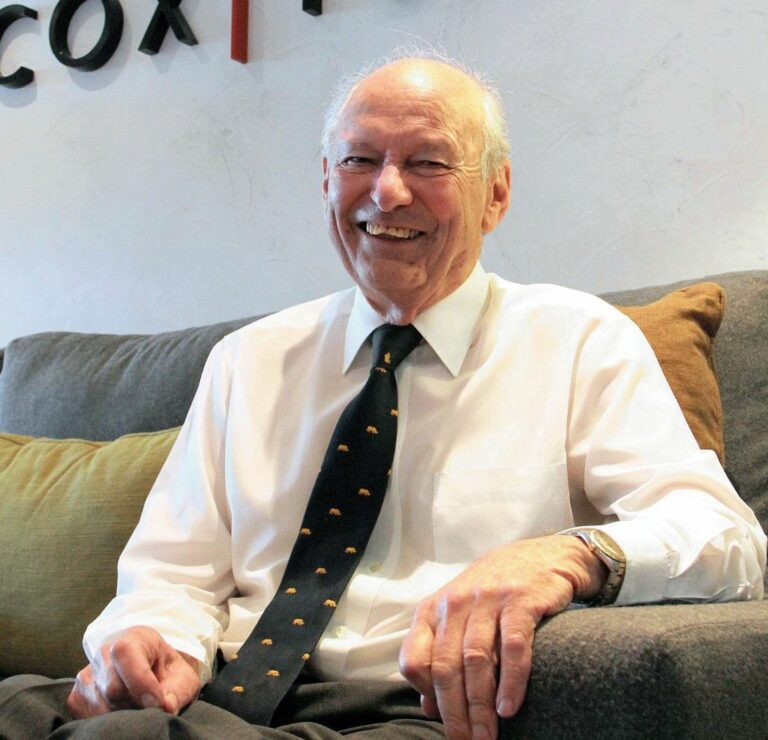 Legal legend Graham Cox, passed away peacefully on Friday, 6 May 2022, just days before his 90th birthday.  He had been battling pneumonia for the past six weeks.

Graham Cox was well recognised in the Durban legal fraternity and the community as a highly respected commercial lawyer. He was, however, a man of many varied talents and interests.

Born on 21 May 1932 in Bloemfontein, he went to Diocesan College (Bishops) which was in many ways the making of him. He told his son Ian Cox that it taught him that life was unfair and that if you wanted anything, you had to make it happen yourself. He certainly did that. He was the first person in his family to go to university.

He went to UCT where he studied commerce with the intention of being a business lawyer. That was unheard of at the time as business lawyers did not exist in South Africa.

In 1964 Graham Cox founded the firm known as Cox Yeats.  “I started my own company because I don’t like being told what to do. I was employed at Unilever after I graduated, and they are a wonderful company to work for, but I wanted to be my own boss,” he recounted in an interview. Together with Jeremy Yeats who joined him in the firm in 1967, Cox Yeats became a formidable team from the outset.  They combined their passion for law with their astute business sense, and with the help of exceptional partners, a multi-award-winning firm was born.  The firm was established on the foundation of ‘care for clients first and foremost and exceptional service together with sound legal advice that is useful to the client’.  This legacy lives on in the firm today.

Graham Cox represented many of the old, established businesses in KZN.  He handled many company acquisitions, takeovers and tax law cases down the years. He had the ability to translate complex legal issues into practical business-friendly solutions that served the needs of the particular client. Moreover, he did this with tact, good humour and discretion. He was tough and demanded excellence but was always scrupulously fair and innately kind. He demanded more of himself than others and liked to lead from the front.

Graham Cox was known for his wicked sense of humour that was often deployed both at work and play, in many instances serving to defuse volatile situations and open the way to workable solutions. Many clients became good friends.

He had what his generation called a first-class brain. Lawyers applauded his superb legal ability. He was one of the best lawyers of his generation and worked with the best. Many such as, Judges John Milne, John Didcott, Hillary Squires and constitutional lawyer Professor Tony Mathews to name just a few, became lifelong friends. He was a lawyer’s lawyer.

During his time of active practice, Graham specialised in Business Law, Tax Law, Trusts and Estate Planning and Construction Law.

Graham certainly lived a full life and has left an indelible footprint in the field of law and certainly in the lives of everyone he came into contact with.  Always confident in his judgement yet humble, never arrogant, a true gentleman in every manner.  His legacy lives on.