Music For The Soul 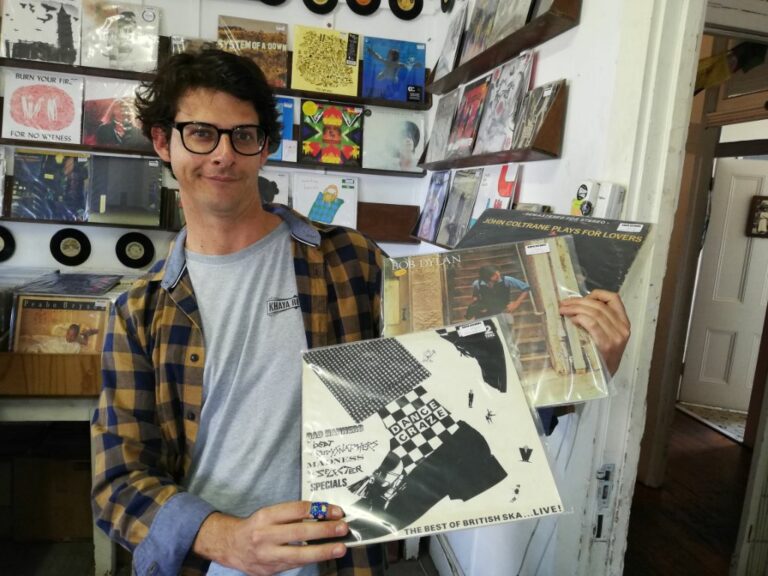 FOR MUSIC CONNOISSEURS NOTHING BEATS GOOD OLD VINYL. AND FOR UMHLANGA’S PAUL BUTTERY, HE HAS MASTERED THE ART OF FINDING THOSE RARE, MAGICAL RECORDS THAT BRING BACK MEMORIES

For those out there who enjoy their music, there’s nothing quite like vinyl. Today, technology dictates that endless music is available with a few clicks of a button but, for the real connoisseurs, vinyl – or records as those who are old enough know them as – has an appeal all of its own.

Lifting the needle and hearing a few crackles and pops before the music starts – that could be construed as one of life’s simplest yet greatest pleasures. Those in the know say that recordings on vinyl remain the best, despite the CD boom and beyond.

Paul Buttery from uMhlanga knows that vinyl creates memories and stirs people’s souls as they find that long-lost recording or song from decades back that they just have to take home. He knows this so well that he makes a living from selling records, a full-time job he has been doing since 2011, although he started selling records in 2004 as a sideline.

“As the brother of renowned South African guitar player Guy Buttery, I grew up with music, especially cassettes and records, followed by CDs. I spent hours taping everything, from friends, off the radio, anywhere I could find what I enjoyed,” said Paul. “I got into records when I discovered I could find really cool music here and there at R5 a piece.

There was a time when no one was too keen on records and I could find all sorts of treasures that were virtually given away.”

Paul started getting an idea of what people were looking for and the internet provided the kick-start to making some money from what he was finding. “I put a few items out there and it was quite profitable. The idea was there were so many records out there, why not do something with them,” he said.

Although he buys records and deals in them, Paul does not consider himself a collector. “Most of what I get I sell, but I do have maybe 1 000 records that could classify as my collection. Even those, I hold on to them for a while and then am happy to let them go,” he said.

Surprisingly, Paul finds most of his records in KwaZulu- Natal, which he reckons is a good place to be looking. “Durban’s music scene was strong in the 60s, 70s and 80s. There were great shops with all the latest releases and it’s surprising what turns up,” he said. “What may seem rare to the casual collector, can be found often. What I do know though, is there are still plenty of records out there.”

Paul’s parents’ garage at their uMhlanga home serves as his warehouse. “I cannot say how many records are in that garage, but at the shop, I would say we have at least 10 000, with new stock coming in three to four times a week,” said Paul. “We have made the shop a bit bigger but rock remains the most popular, with another separate room for jazz, swing and classical music. South African music is also popular with many overseas people making enquiries.”

Deceased estates, people wanting to get rid of records, they all add to Paul’s stock, similar to books. “More often than not I can find what people are looking for. It might take time, but it will come. Unless it’s something obscure, I could get it,” he said.

Paul is Durban’s living treasure box. He has been at his shop near Greyville Racecourse for the past four years and is one of the city’s rare dedicated record shops.