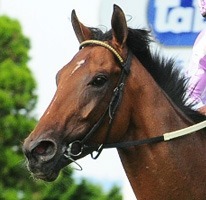 Pierre Jourdan is looking good for the Vodacom Durban July 2012

Pierre Jourdan will have another bite at a fairytale victory in Saturday’s Vodacom Durban July and trainer Gary Alexander said the chief reason he wanted to win it was for his father Duncan, who went close a few times as a jockey in the big race.

Alexander reckoned the five-year-old Parade Leader gelding was moving better than he had been this time last year and was very happy with his preparation.

“He’s had a very good prep,” said Alexander, talking from Summerveld, where Pierre Jourdan has been based for the Champions Season.

Pierre Jourdan has only had one race in Durban this season – an eyecatching third in the Grade 1 Rising Sun Gold Challenge over 1600m on June 9.

However, Alexander said, “He had a hard July gallop. He didn’t play and what Robbie (Fradd) was particularly pleased about was that he was pulling him up the hill and really wanted to do it. He doesn’t take a lot. You only have to have him well on the day and he does the rest. That gallop has brought him on nicely.”

Looking back on his career Alexander said that the way Pierre Jourdan had won the Grade 2 Gauteng Guineas and the SA Classic as a three-year-old had shown that he had the ability at the highest level.

“But he then broke down in the Summer Cup. Since then he’s been on and off and we have to get him to move well on the day.”

Pierre Jourdan ran a cracker last year, despite looking around at the new surrounds, and ran on strongly in the straight to finish just one length behind Igugu, who is regarded as one of the great winners of the race.

Last year Pierre Jourdan was drawn four, a lot further in than his 13 draw this year, but Alexander reckoned this could be a plus.

“Last year he only just missed all the trouble, but he did get cut into from behind. The July is always going to be rough and rather be out than be knocked around. He has had one or two problems and being knocked won’t help.”

Alexander reckoned Pierre Jourdan had the right jockey aboard in Robbie Fradd.

“He knows him well and gets on well with him. Having him here to work him has also helped. He also has the necessary big match July temperament.”

However, Alexander is concerned about Pierre Jourdan’s top weight of 60kg.

His rags to riches story earned him the nickname “the people’s horse” and there will be many rooting for him on Saturday.

Alexander concluded, “He is well prepped and is moving well, so now we are just hoping for luck in running. A win would be a fairytale.”

To find out what the bookies have to say, click here