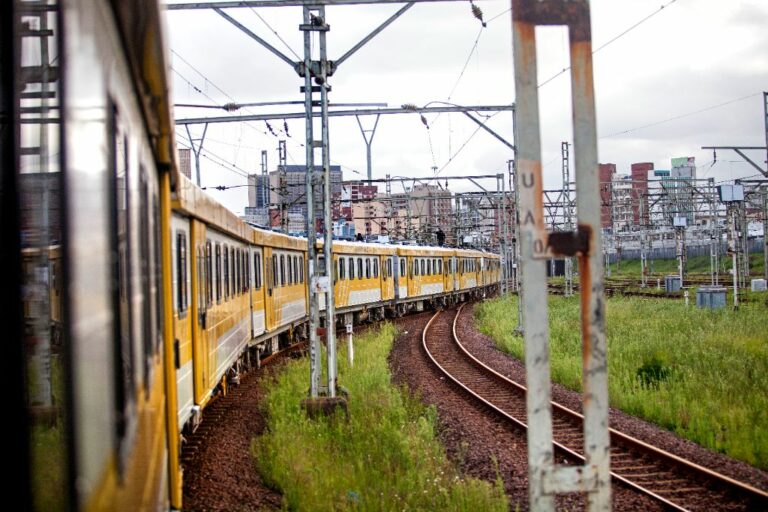 Few people are necessarily aware of the rail crisis in South Africa. They only know the highways are becoming increasingly choked and that the economy can be held to ransom if there’s a truck blockade on the N3 between Johannesburg and Durban, writes Jason Humphries.

Entitled Why There Are So Many Trucks On The Road And So Few Trains On The Tracks, it is a staggering indictment of the state of parastatals in South Africa.

Williams begins his paper with an anecdote. He recalls a 2010 press conference to unveil the R70-million upgrade of a 14km rail link between central Johannesburg and Nasrec near the FNB Stadium for the Soccer World Cup. The new line was able to ferry 20 000 peak-hour passengers.

Williams then hit fast forward to 2020: the line is closed, the steel of the rails is rusting, the overhead electrical equipment has vanished “apart from a few lengths of cable drooping uselessly from the masts”. It is a scene of vandalism and litter-strewn neglect.

The broken and deserted rail link, wrote Williams, was “an emblem of what has happened to the South African railway network – once regarded as one of the world’s best”.

The Williams report details the destruction of PRASA, the passenger rail service and Transnet Freight Rail. It makes for grim reading and talks to years of mismanagement, deteriorating corporate governance that has resulted in broken organisations.

For example, in 2019, he writes, about 170 goods trains a month were cancelled because of a spike in the theft of overhead cables with a huge knock-on effect for exporters of minerals, grain and motor vehicles, among others.

South Africa’s failure to invest and maintain the country’s rail system is causing a multitude of problems, not least of which is the strain it has placed on the national road network.

The lack of an efficient rail system means the country has become heavily reliant on trucks for the transportation of goods, and increased trucking – along with overloading – means the life span of roads has been significantly impacted.

The Williams report quotes a Sanral expert who notes that if a truck is overloaded beyond the maximum by at least 7%, “a single trip can do more damage to the road than 80 000 cars. If a national road was designed to last for 20 years, and there is 10% overloading, the lifespan of the roads is reduced by eight to 10 years.

Williams charts the history of rail’s decline – from the 1977 government policy shift that ended rail protection to the corruption and poor management at PRASA. Williams notes that then Public Protector Thuli Madonsela’s report entitled Derailed, found that at least R2-billion had been misappropriated at PRASA.

He recalls the cringeworthy story of 13 trains that PRASA took delivery of, which were then found to be too tall for South Africa’s railway infrastructure.

In 2015 the Department of Transport produced a Green Paper which recommended that a substantial number of passenger and goods traffic needed to be redirected to rail. This, Williams noted, was unlikely to be implemented due to the myriad issues facing the rail industry.

Line closures, poor maintenance, theft, vandalism and crime are just some of the problems.

Williams writes: “Contrary to some perceptions, our railway decline started long before the ANC took over government in 1994. It is the result of a perfect and sustained storm of misguided policy, poor strategy, incoherent administrative structures, blurred reporting lines, managerial incompetence, skills shortages, corruption, unfair road competition and a criminal neglect of security and safety.”

Perhaps the only way to save the railways, Williams suggested, was full or part privatisation as the government does not have the finances available for a full revamp of a decrepit, failing rail network.

However, any privatisation talk invokes the ire of many, including vocal trade unions and civil society critics who argue this is a totally inadequate response to decades of government corruption and mismanagement.