Raptor Rescue – Be Part of the Solution 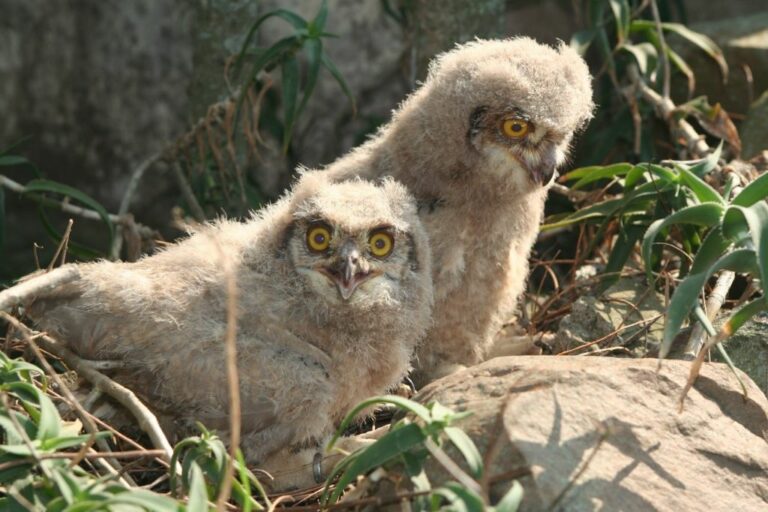 Spotted eagle owls breed on the ground and make no nest and chicks are often seen in the undergrowth. Please contact Raptor Rescue before “rescuing” any young raptor. Keep dogs and cats well away for the safety of the chicks.

The populations of most species of birds of prey are plummeting about as fast as a peregrine falcon’s dive, and we need to step up and make a difference.

Ben Hoffman has been involved in conservation and research for over 40 years. He heads up Raptor Rescue, a highly specialised facility dedicated to the rescue, rehabilitation and release of birds of prey.

Raptor Rescue is based in Camperdown, at the African Raptor Centre. The non-releasable birds at the center play a vital role in conservation education. School children and families can experience interaction with the birds in the daily flying show and learn about the 19 species that have been bred successfully at the centre. As adorable as the pygmy falcons and owls are, the true treat is being able to see critically endangered Bearded Vultures up close. The Bearded Vulture Recovery Programme aims to ensure the long-term survival of this critically endangered species by supplementation of chicks from the captive breeding program. The current population size is less than 100 breeding pairs.

In an interview, Ben pointed out that in recent years, the numbers of call-outs for all species of raptors have dropped dramatically. This points to a possible correlation with the collapsing populations of many species and calls for urgent attention.

Human-wildlife conflict is becoming increasingly concerning, particularly in conservation areas within the urban landscape. Understanding the interaction between pets and wildlife requires further research and technological solutions. Crowned Eagles are often identified as the culprits. Although research has shown that less than 1% of a crowned eagle’s diet consists of domestic animals, the occasional cat, dog, or chicken has fallen prey to a crowned eagle as they adapt to the urban environment and drastic decrease in natural prey.

Citizen science, or public participation in scientific research, has a tremendously valuable role to play in conservation. People that love animals and are passionate about conservation can make active contributions to research by volunteering and raising awareness of the need for funding for specific projects, such as the tracking and monitoring of crowned eagles in the Upper Highway. Incidents and sightings can be easily and quickly reported on various social media platforms. Good quality research depends on good data, which can be readily gathered via mobile applications that can be made accessible to local residents. These are our birds in our areas and their protection should be prioritised by our community.

Please contact Ben on the Raptor Rescue Helpline 082 359 0900 should you find an injured or compromised raptor of any kind, or if you have any questions or concerns.