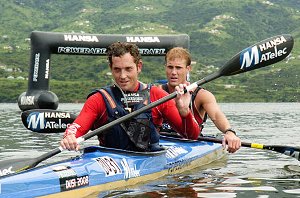 A new type of paddler is being allowed to compete in this year’s Dusi Canoe Marathon, which takes place from 19-21 February.

A revision of the rules governing the type and specifications of the craft paddlers set to tackle river marathons such as the Dusi Canoe Marathon use has opened the doorway for a new type of paddler to take on this year’s edition of the Pietermaritzburg to Durban quest, which takes place from 19-21 February.

Kayaks, commonly known to the South African paddling fraternity as canoes, require paddlers to sit inside the boat. Canoeing South Africa’s recent rule revision will, however, now allow competitors paddling sit-on-top boats similar to surfskis to be categorized in the same class as their more traditional counterparts.

“Sit-on-tops have always been recognized by the International Canoe Federation (ICF). However, the moment the hull is altered, in order for a self-bailer to be fitted for example, then they are no longer within ICF regulations,” explains Dusi General Manager and Canoeing South Africa’s (CSA) Marathon Committee Chairman, Brett Austen Smith.

“Essentially, CSA recently modified its rules to allow craft with these self-bailers that either protrude from or are indented into the hull, to be classed as normal K1s (single kayaks) and K2s (double kayaks) provided they meet the ICF’s length, breadth and weight specifications,” he adds.

The move brings a new dimension to the country’s river marathon scene and, in particular, that of the Dusi.

“Theoretically a sit-on-top should be easier, and hence quicker, to get in and out of, especially if one falls out in the river. From what we understand though, they are a fair bit heavier and a little tougher to steer and manoeuvre in the water than a kayak so there are pros and cons.

“It will however be particularly interesting from a Dusi perspective as now there is no need for sit-on-top competitors to wear a splash cover and so it will save them a lot of time and weight on the portages!

“It will be interesting to see who now lines up on the Dusi start line come mid-February and with what boat!” says Austen Smith.

The paddlers aren’t the only ones having to weigh up the various advantages and disadvantages of racing on a sit-on-top. Austen Smith explains that the revised conditions also bring a new element that the national federation and race organisers will need to consider.

“CSA now has to determine the various finer details of this rule alteration such as how deep the hull indentation for the self-bailers can and must be, etc. As the Dusi, we have also requested that CSA work closely with the boat manufacturers on issues such as buoyancy which is now out of our control with these craft.

“Hopefully this will, however, mean that surfski paddlers are a little more comfortable on the river, being in a more familiar type of boat, and hence will make river marathons a little more appealing to the surfski market and, in turn, we then see more people racing river marathons such as the Dusi,” Austen Smith adds expectantly.

The 64th edition of the Dusi Canoe Marathon takes place from Camps Drift in Pietermaritzburg to Blue Lagoon in Durban from Thursday 19 to Saturday 21 February 2015.