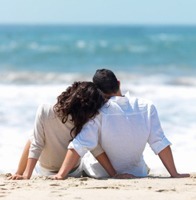 Nearly two-thirds of married couples and people with a significant other say their partner is the most important source of happiness in their lives, according to a new global poll released on Valentine’s Day.

“What strikes us when we look at the data is that you have this majority of global citizens who are really looking at home for happiness,” said Keren Gottfried, research manager at Ipsos Global Public Affairs, which conducted the survey in 24 countries.

SA reported the highest levels of domestic bliss, with 82 percent of settled South Africans saying nothing could make them happier than their partner.

Japanese and South Korean couples were at the other end of the scale. Nearly half said they would hesitate to say their partner was the single best thing in their lives, although they conceded that he or she was the source of at least some of their happiness.

Just shows, we’re not scared to share the love!

More on the study here