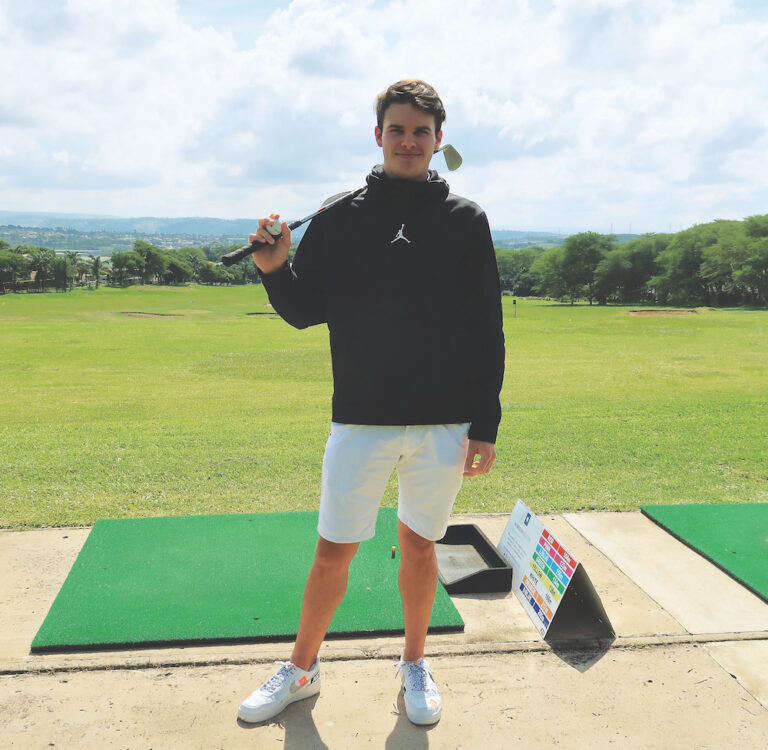 He seems almost shy having to pose for me in front of his friend at the Mount Edgecombe driving range, but the quietly-spoken young man possesses a steely determination. He’s on a break from the Sunshine Tour for a week and giving himself a little time out with friends and family before heading off to compete in the Investec Royal Swazi Open in May.

The youngest player on the southern African professional golf tour, Luke Mayo started playing golf aged eight, “basically as a school extra mural”. “The coach realised straight away that I had a natural ability for the game and sent me off to play in a tournament in Joburg,” says Luke. “I came third and played in America the next year.”

He soon progressed from SA Kids Golf to playing for SA Schools in Grades 8, 9 and 10.

He matriculated from Clifton College in 2017 intent on pursuing his dream of turning professional and joining the Sunshine Tour. With only 30 spots available Luke had to play his heart out and did just that at the final qualifying tournament at Houghton Country Club in March.

“I came fourth after shooting 66 in the first round, which included a hole-in-one (Luke’s fourth in his career), followed by rounds of 69, 70 and 73 for a 10 under par total. It was definitely the hardest tournament I have ever played, because everything was riding on it, but I prepared properly, and it paid off.”

Dedication and discipline are key to keeping ahead of the game and for Luke that means practicing six days a week with a gym session in the morning. “It means missing out on a lot of social events and time with my friends, but that’s what it takes,” says Luke. “I recently started with a new gym trainer who keeps me fit and flexible and I drive to Kloof five days a week to practice with my coach, Shaun Coetzee. “He has been a great help in getting me through Q-school and keeping me disciplined.”

When it comes to big match temperament, Luke says he’s lucky in that he loves the “tournament feeling”. “Social golf doesn’t excite me,” he laughs. “Now that I’m a professional, it’s much easier to get motivated and to make the sacrifices.”

Having been told how tough it was to earn his pro card, Luke said without sounding “over confident”, his advice to other aspiring players is to go for it.

“You have to really want it and work hard and, obviously, have the financial backing to afford the travel and tournaments, but it’s not as impossible as people say.”

Luke has played in Africa, America, the UK and Italy, but still ranks playing St Andrews (when he was 12) as a highlight, followed closely by playing in a SA versus India test match at Leopard Creek, Johann Rupert’s private course.

While he’s on the boil, he plans to go to the European Tour qualifying school at the end of the year, hoping to make it on to that elite circuit and, just maybe, playing with his hero Tiger Woods.

“Being good enough to play with Tiger is my goal,” says Luke. “He’s achieved so much in our era and turned golf into the big industry it is today. As for local golfers, I’d like to play with Ernie Els and I think it would be very interesting to play with Gary Player – he is such a character!

“I have huge respect for SA golfers, as does the rest of the world.” There’s no doubt Luke is on track to add to the country’s golfing credentials.