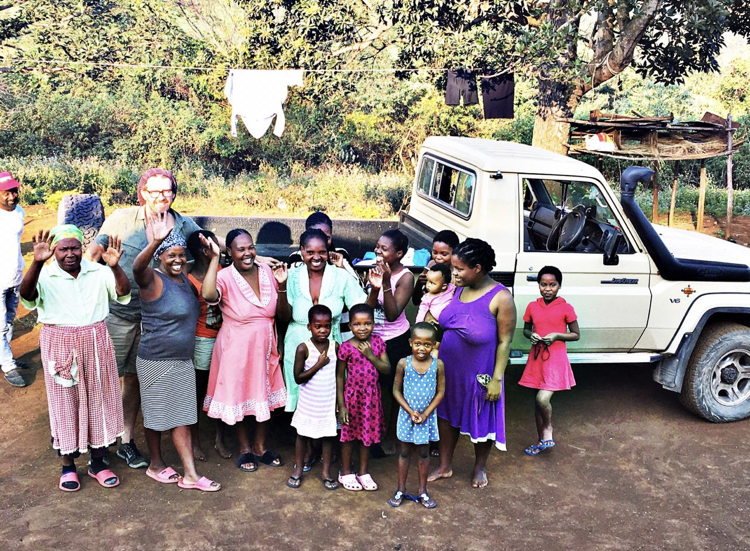 Ubuntu Army has the power of an army, but that strength is born in the hearts of its members. Anne Schauffer caught up with founder Clint McLean.

Hi, We are Ubuntu Army. Please don’t send us your money.

Prior to the recent floods, these words would greet you on the Ubuntu Army Facebook page. Refreshing, yes, but chat to founder Clint McLean, and you’ll find that not only is Ubuntu Army not a charity, but Clint is vehemently opposed to the concept of charity.

It all began at the onset of the 2020 lockdown. Durban North resident Clint McLean is a lot of things, but back then, he was in his twenty-third year as a production designer and art director working between LA, London and Durban, directing films, shows, corporate art, and design elements for the likes of Nike and Adidas: “I was literally about to escape to the mountains to my little farm when I heard Covid was on its way. I knew I couldn’t go. I said to my son, Tor, ‘I have to stay and fight it. Had no real idea really what ‘fight it’ meant.”

Two hours later Clint was online working with an Israeli designer, designing open-source respirators and working out how to give the designs to South Africa and the world.

That was the start. Within a month, he was feeding thousands: “I went into Point Road, worked out of a church, and created a massive feeding and support programme.” We represented the foreign nationals in Durban, at a time when they essentially became Covid refugees. Within months, Clint and his newly formed Ubuntu Army were feeding thousands upon thousands.

Clint established the Ubuntu Army Facebook page, and that’s how he leveraged support. He’s a writer, so he used that medium to tell the stories. The more he wrote, the more he touched people. His posts were printed verbatim in publications around the globe. His particular stance, too, was a significant driver: “We are not a charity. We’re Crisis Relief and Crisis Response. When we’re not in crisis, we’re about poverty alleviation. We are not about perpetuating poverty – we don’t believe in giving handouts to keep those who’re hungry, fed. We believe in creating dignity and independence.”

For Clint, the charity model serves no purpose, just reinforces poverty: “Our aim is to create systems, solutions and motivations to get people to start looking at their situation differently, looking at poverty generally – both as people with money, and those without – so they can at some point make a proactive move towards alleviating or escaping poverty.” Clint wrote about that viewpoint, about our rainbow nation, what it meant, and what we’re experiencing. And it worked: “People were ready to stand up – it was a moment of giving. We had a common destiny as a country and a world, and that united us.”

The Ubuntu Army Facebook page increased in popularity – anyone could, and can, join – and those 8 000 members shared and shared: “People were reaching out from around the world. We have brilliant donors in California, New Zealand, Poland, UK, Australia, Rio de Janeiro … all who believe in it. We have local donors of all sorts, from grain manufacturers to elderly ladies who make soup. In the two years I have never ever had a supply problem with food or donations, and I still don’t.”

The response to the Ubuntu Army’s call during the KZN floods was equally positive: “No lack of donors. We compiled response packs – a blanket, food, water, some clothes – and dropped them off at numerous locations.” There are so many emotional moments – all of them documented on the Facebook pages – but for Clint, this one was particularly poignant. He wrote: This afternoon, I delivered food, blankets and clothes to a group of gogos and children in the Ghandi memorial in Bhambayi, then drove into Matikwe, to the Siya crèche, with a similar delivery. There, in the crumbled remains of a house, among a throng of friends and family, and next to the dozen chicks being sheltered from the rain, was an old friend, a gogo in her late 70s, who we have supported over the past two years. She is blind, and upon hearing my voice, burst into tears, and then laughter, telling me she knew Ubuntu Army was coming. This is why we do this. Ubuntu.

Rather than seeing himself as heading up the Ubuntu Army, Clint describes himself as the tip of the spear: “Sure I started it, but so many others step up and help – there’s a lawyer in LA, a doctor in Paris and a grandmother in Umbilo making soup. People want to be part of something bigger than themselves.”

Over time, Ubuntu Army gave birth to Ubuntu Link – 6 000 families on Facebook: “You post your request – ‘please help me, here’s my number’ – and people from around the world step up and make connections.” The great thing is that this is no top-heavy charity which has to budget or pay salaries. There’s also no middleman: “There’s no point in having a middleman between giver and receiver. With the money or resources I have, if I give directly to the person, then a connection is made, a community is created. If the person who needs always has a charity as their first point of contact, they become reliant on it.”

As Clint says, “Give if you have. Take if you need. If you can give, identify your own five, 10, 17 people who need help. Reach out to them and create a link to them, an Ubuntu Link. Get to know them, learn about their lives, chat to them, create community with them. Compassion builds community and destroys division. Simple and powerful, but it requires us all to commit, to all step up. We are all members of Ubuntu Army, and we all need to recreate the rainbow, one Ubuntu Link at a time.

“Our model – forged during Covid and refined during the riots – has been polished during the floods. Our formula, if practiced during more calm times, on a wider, national level, has the power, I believe, to unite our country.”

Clint has another string to his bow. Well, a few actually. He has dedicated the past five years to building a collection of sculptures in Los Angeles – the Niemand Collection – which he is about to present globally. There’s one piece in the collection Clint would love to sell to a South African collector so it can come home: “The piece, Ubuntu19: The Rise of Compassion, was built as a tribute to the people who stood up as the army of Ubuntu during Covid, and serves as a monument to the power of compassion, of creating community and of taking personal responsibility for reclaiming our rainbow nation. Ubuntu.” *