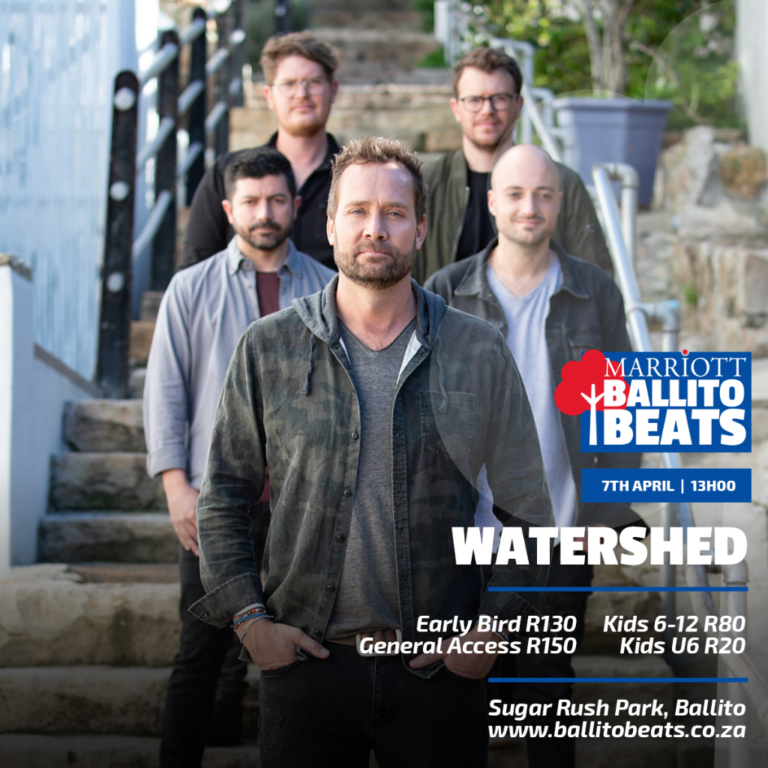 Watershed, one of South Africa’s most successful and well-loved bands will be embarking on a national tour of South Africa for 12 months and Ballito locals are lucky enough to be on the list to see the iconic band performing right here in their backyard.

Sugar Rush Park in Ballito will once again come alive with the sounds of laughter, happy chatter and live music as North Coast fans come together for a fun, family day out. And what better way to spend a Sunday afternoon, than listening to the up-tempo acoustic sounds of the highly acclaimed 5 piece band.

To date, the multi-platinum artists have released 5 studio albums, along with a greatest hits album during their 18 year career, as well as receiving 2 SAMA awards for best pop album. They are also multiple winners of SA’s best band award by People Magazine. On Sunday the 7th of April, they will be bringing their musical excellence, along with almost two decade of music and memories to KZN.

Eighteen years after the release of their debut album ‘in the meantime’, Watershed have put together their 6th studio album ‘Harbour’. This South African music success story has had a string of radio singles that way surpasses the years they have been around. The crowd is in for a  treat, with a  mix of old favourites like ‘Indigo girl’, ‘Fine way’ and ‘Letters’ plus a selection of up tempo, groove filled, bass driven tracks from the new album.

The band has toured and had major success in the big European territories performing alongside some of the biggest names in world music, such as U2, Peter Gabriel, Bob Geldof, The Corrs, The Cranberries. Craig Hinds, lead singer and songwriter for the band has built a career on lyrics and melodies that have touched his fans and consistently grown a following with every album the band has produced.

Opening act Tanner Wareham will also be performing for the first time on the Ballito Beats stage. Together with drummer Reece Cook, the duo will warm up the crowds with a series of alternative pop tracks, catchy hooks and instrumental arrangements.

The Watershed concert will take place on Sunday the 7th of April. Gates will open at 13h00, with supporting act Tanner Wareham performing from 14h00 and Watershed on stage from 15h30. Early bird tickets cost R135 for adults. Thereafter, tickets will be on sale for R150 each for adults. R80 for children between 6 and 12, and R20 for children under 6. Tickets are available now on www.webtickets.co.za.

The Marriott Ballito Beats series promises to bring even more great entertainment with their next two upcoming shows; with the returning stage-legends Ard Matthews and Arno Carstens on Sunday the 11th of August, as they combine their musical expertise for another crowd-pleasing, and banter-filled set. Then on Sunday the 6th of October, the hugely popular Parlotones will be back once again to entertain the 3000-strong crowd with their sing-along favourites.