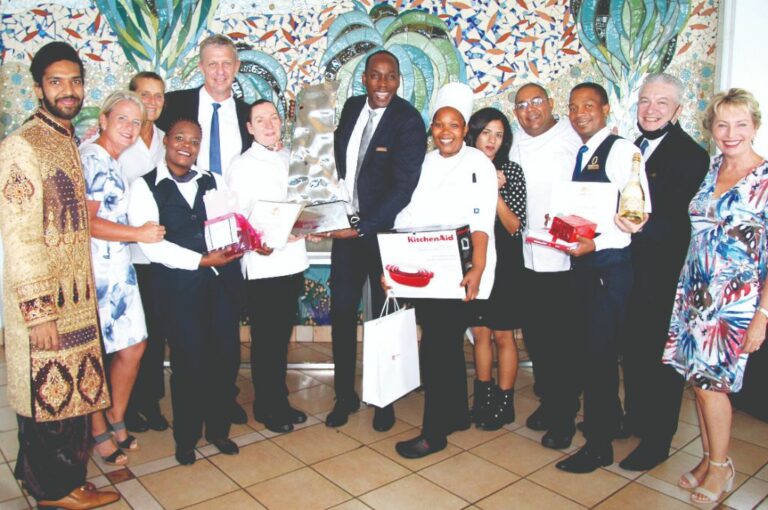 Pictured above: Jenni – with a large Rothko inspired piece behind her – is co-exhibiting at The Pencil Club with abstract artist Sarita Rheeder, from November 10 to 24.

Jenni Button’s vast abstract canvasses will populate the walls of uMhlanga’s Pencil Club in early November. Guests at the opening will also be treated to a trunk show of her latest designs, writes Anne Schauffer.

Say the name Jenni Button, and stylish, high-end apparel springs to mind: first, her distinctive Jenni Button label and stores countrywide, and then, in the past 22 years, her Philosophy brand.

It won’t be a real surprise to devotees of her distinctive ranges that Jenni is, in fact, a fine arts and graphic design graduate, not clothing. But the design-art connection has always been there: “Ever since I can remember – age four I think – I began drawing women. Always women. Perhaps it was an early fashion obsession, but I was infatuated with elegant women in beautiful dresses,” says Jenni.

Her career began at acclaimed advertising agency RSTM Ogilvy & Mather, starting off in a junior skivvy role, and moving up to art director. When you ask her about mentors, she talks rather about inspirational figures from the art and fashion world. She adores colour, so talks Ronald Sassoon, Mondrian, Rothco and Willem De Koning, so when RSTM O&M were tasked with the Citi Golf ad campaign, her instinct was to play with their colours. Her legendary Red, Yellow, Blue Not Green ad became one of the most successful car campaigns in Africa.

She has wonderful memories of time spent at RSTM O&M: “Advertising was probably my best school. We gladly worked ourselves to death, slept under our desks rather than going home, faced the fierce competition head on. But it was such a stimulating time, and that wonderful competitive world teaches you to always think out of the box, develop ‘blue sky’ thinking to anticipate and predict what’s ahead.”

Ahead for Jenni, was a long-held dream of owning her own boutique, so when she came across a little shop in Adderley Street, that was it. “I always wanted my own exclusive boutique inspired totally by Armani’s masculine entry for women into the marketplace, with unafraid, brave, bold cropped-haired women like Annie Lennox and Madonna. Donna Karen’s powerful yet feminine designs were a huge inspiration. I opened Jenni Button.”

She laughs: “I knew nothing, I just wanted to do it. Everyone in the industry laughed at me. I could just tell what the big factories were thinking, ‘We’ll give her six months, she’s never going to survive’. When I think back to that moment, the passion I had, combined with blindness and naivety … if I knew then, what I know now …!”

Yes and no, of course, because Jenni Button did more than survive. She became a label with which to be reckoned: “I was obsessed with clothing, first with Armani’s simplistic design, then later, with print, and I still am.” She put together ranges unlike anyone else’s, and she did everything herself. All the designs. She pulled in two partners who handled the finances, employed a production assistant, opened several other stores, and alone, she continued to design.

But as the years ticked over, the clothing industry faced numerous onslaughts, not least of all production out of China which she refused to support. But more than that, Jenni could see the writing on the wall as the “home and cocooning” trend deepened: “Clothing as we knew it, is no longer a priority,” she says bluntly.

Jenni Button closed its doors a few years after she left the company … and her next phase, Philosophy was born. Her loyal clientele still wanted her designs, her eye, her brands, and that was 22 years ago. Little doubt the transition was tough, but Jenni’s no quitter: “I always look towards the sun, rather than dwell on the past. I have an ‘I Can Do This’ attitude, and it’s carried me through.” Her intention was to keep Philosophy far smaller, fewer stores, more like a hobby. With one eye on the diminishing market and the arrival of Covid, she took the decision to do things differently. She moved online, although for her, this isn’t a very successful platform for high-end fashion as her clients still want to touch and feel.

Today, Philosophy has a footprint in a new store in Parkhurst in Johannesburg, another in Newlands in Cape Town – where she lives – and another in a fabulous boutique called Tten Bazaar in Plettenberg Bay. She has a small design room, and she’s still designing every garment. She’s a great exponent of supporting local, and says many of her clients are phenomenal – particularly those in KZN – they buy exclusively local.

Of course, design is art, but Jenni’s art has taken an entirely new direction, more abstract, massive canvasses sometimes two and three metres: “Fashion drawings have their own style, and even at college, I had to take care that when I drew women I didn’t make them too pretty, taller, thinner, less cellulite, too predictable, or literal. I think that’s why I love painting men.”

Jenni says it’s taken her 20 years to draw like a child: “That’s the whole cathartic process which I’m going through right now. Abstract art is so much more challenging than my super realistic portraits.” She’s done a full 360, and is drawn strongly to contemporary art: “Graphic design teaches you how to simplify. When you design a logo, it has to hit you slap bang in the middle of the forehead. I do have this innate graphic gut.”

Jenni’s love of bold colour stretches from acid yellow, greens and turquoise, to red: “I’m Aries, so I’m drawn to the warmer tones like reds and oranges.”

“My future? One more year,” she says. “Just one. Then it’ll be time to leave Philosophy behind, and head to glorious Tulbagh, to my wonderful farmer man – olives, wine, art and gardening. I’m essentially reclusive, and I love being and staying home, surrounded by nature and my cats, and simply doing all the things I love.”