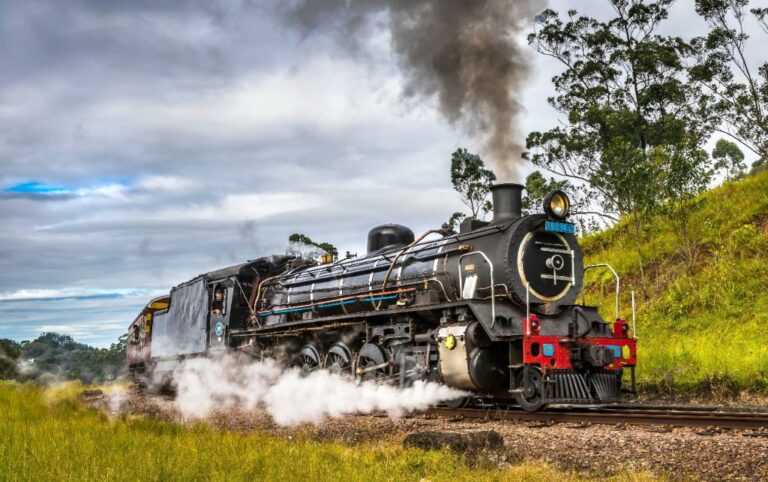 The Umgeni Steam Railway is a multisensory journey back in time. Affectionately known as the Inchanga Choo Choo, it has all the nostalgia of a bygone era – the soothing clickety-clacking of the train on the track, the clouds of smoke, the smell of polished wood and leather, and cheerful hoots and whistles all the way, writes Illa Thompson.

Umgeni Steam Railway (USR) is a slick, efficient non-profit organisation run by a charming bunch of train-mad volunteers – all hardcore ferroequinologists (lovers of “iron horses”). They are dedicated to preserving railway heritage in South Africa, a role they take very seriously. They are also associated with the Railway Society of South Africa, KZN, and supported by 1 000 Hills Community Tourism Organisation.

The volunteers are the custodians of rolling stock, books and documents representing the different eras of railways in South Africa. Over the years Umgeni Steam Railway has collected a sizeable array of historically significant items, including 10 locomotives, 50 coaches, and a variety of goods wagons, most of which remain in storage awaiting preservation.

The focus of USR though, is the running of regular heritage trains from Kloof to Inchanga and back again, which are open to the public. Most are pulled by the much-loved 84-year-old steam loco, Wesley, and sometimes by a vintage diesel loco.

Trains depart from and return to Stokers Arms in Kloof, and head towards the halfway mark, Inchanga, a distance of 25km which takes an hour each way through the heart of the 1 000 Hills tourism route, on the Old Main Line traversing through one of the oldest operating tunnels in South Africa in Drummond.

At Inchanga, passengers can disembark and wander through the craft market and food garden, visit the model railway and stroll up the little hill to the comprehensive Railway Museum in the old Station Master’s House.

One hundred and twenty years ago, and for more than 30 years, Inchanga was an important train stopping point being halfway between Durban and Pietermaritzburg. Prior to the railway line, it would take between five and 10 days to travel from Durban to Pietermaritzburg on an ox-cart. South Africa led the way with steam train technology in 1860 with the opening of the first steam railway in southern Africa. Durban did it first, which was cause for huge celebrations. Cape Town followed, two years later.

“Not only was Durban the leader in introducing railways to the country, but USR is proud to be continuing this tradition. We have been going for 40 years, and are the oldest private railway heritage operator in the country and currently the only volunteer group still running heritage trains,” said Ashley Peter, chairman of Umgeni Steam Railway. *

USR typically runs trains on the last weekend of every month, and holidays; it is a non-profit organisation run by volunteers who are always welcome – no particular skills are needed; USR is supported by 1 000 Hills Community Tourism Organisation. To find out about these and other things to do in the area: https://www.1000hillstourism.co.za/.