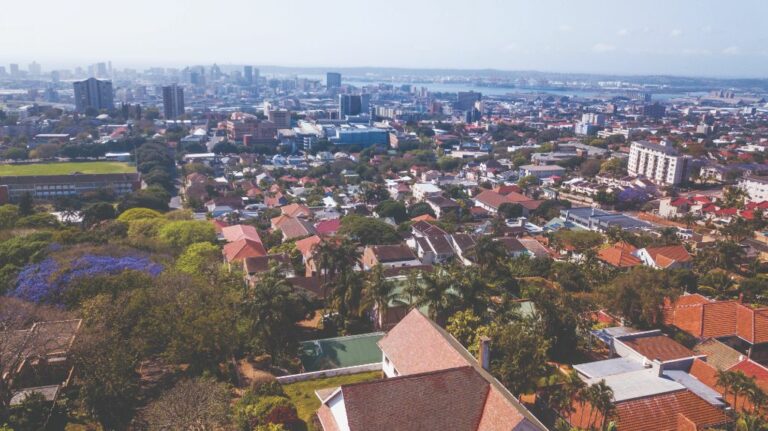 Too soon to panic? Some of KZN’s leading real estate professionals weigh in on market sentiment since the impact of the pandemic and the recent unrest, writes Anne Schauffer.

It was the best of times, it was the worst of times, said Charles Dickens in his Tale of Two Cities and he could have been writing about the KZN property market in 2020 and 2021.

Rising from the ashes because of the pandemic, sales soared for most property brands and some experienced their most buoyant spell ever.

“Weird,” was the wry description from Kim Woods, Durban managing partner of Tyson Properties. She saw the market flourish during Covid, and she wasn’t alone in her reaction. It took everyone by surprise. The real estate fraternity’s analysis of the phenomenon put it down to a cocktail of pent-up demand, the lowest interest rates in 50 years, and bank willingness to offer home loans.

Cumulatively, this propelled many renters to buy.

But there were other factors in play, prompted, exacerbated or accelerated by the pandemic rollercoaster.

Semigration was one. There is nothing new about this general coastal move to the Western Cape and KwaZulu-Natal, as the yearning for a less stressed, balanced lifestyle grows. But with Covid, semigration developed further impetus as the working-from-home reality not only meant many could work from almost anywhere – even permanently – but it presented another possibility too.

Smaller towns or suburbs away from the city offered affordability, which translated into less work, more leisure. This move fed into the mental health truism of “reconnection with nature” as a healer, so outdoor country living, hiking and biking trails, natural social distancing, the beach and eco-living are all big drawcards.

The KZN South Coast was a case in point, where affordability meets the beach life. Joleen Giraudeau, manager for Seeff South Coast says, “The South Coast received a great boost following the Covid pandemic, driven by buyers looking to escape the confines of their homes.”

Mohammed Amra, Pam Golding Properties’ area principal for Durban, is convinced the most fundamental change has been this shift to universal remote working: “As time passes and, in places, a growing percentage of the population is vaccinated, there is an increasing focus on trying to figure out how we will work in future. Many employers are looking to influence how and where their employees work, while reassessing their office space requirements.

This means there is likely to be an increase in new residential stock in some hubs. In South Africa, a significant portion of housing demand comes from first-time buyers as a significant proportion of the population are young and not yet in the formal housing market. This suggests that a possible proliferation of more affordable, mixed-use developments close to public transport and business hubs may well be a key growth sector in the future. “What we know at the very least is that demand for office space is likely to be reduced and that at least some of that space will be repurposed for residential accommodation.

The market buoyancy through Covid lockdowns has also been around space. Against the steady gated-estate flow, families sought bigger freestanding properties with the ever-popular granny flat highest on the shopping list, whether for granny, an office or a source of income. On the flip side, spending time at home gave many homeowners the opportunity to reassess their priorities, and for others, loss of income forced a downsize. Home alterations and extensions were plotted countrywide. Upsize, downsize, resize meant movement for property.

And then there was the unrest.

Most KZN residential property practitioners say it is too soon to tell the impact. But, clearly, there’s a knee-jerk reaction, as people process what went down, with reactions ranging from:

I’m absolutely out of here, but not yet.

Realistically, many people don’t follow through on talk of emigration. But for some (and the numbers have yet to be tallied) the mayhem accelerated a decision to go.

Property is an emotional purchase, greatly driven by sentiment. As Myles Wakefield, CEO of Wakefields Real Estate, says: “Uncertainty is never going to be a positive – sentiment and confidence has been knocked, and that could well have an effect on the property market. Certainly, for those homeowners who’ve been considering moving south or emigrating, this could be the nudge they needed.”

And while most are still firmly of the view it’s too soon to assess the landscape, most concur. Andreas Wassenaar, licensee and principal for Seeff Zimbali, said: “The week of lawlessness and looting was a tipping point for people who were already close to emigrating, and a spike in emigration figures can be expected over the next six months.”

Samuel Seeff, chairman of the Seeff Property Group, hasn’t seen any “panic” listing of people looking to sell up and move, but added: “Possibly those who were thinking of emigrating, might now think about it a bit more seriously.”

“They’re seriously considering their options moving forward such as relocating to another province, moving overseas, sectional title complexes, and so on.” But, he does have a rider: “It should always be remembered that most South Africans do not have the luxury of being able to relocate at a whim, life is much more complicated than that.”

Thompson says KZN will see a lot of rebuilding: “There is trepidation and a general sense of ‘unease’ influencing decision making. The unrest has stimulated interest in gated estates and secure villages.

“No doubt, secure gated estate living with the ‘safety in numbers’ factor, is fuelling increased interest in that sector.”

In addition, South Africans are being far more rigorous in researching municipalities/governance, with a noticeable shift in relocation away from poorly managed municipalities – and Eastern and Western Cape towns have benefitted.

Chas Everitt International director Barry Davies says the community solidarity that emerged during the riots and the mass clean-ups and food-drives in the aftermath actually grew property confidence. “Demand has resumed and we ended July strongly, with transaction volumes back up to around 75% of our monthly average and rising.”

“If this storm is a one-off, it gives us – and hopefully, the government – an opportunity to regroup, rethink, and to pull diverse groups of people together for the common good. I do believe if we’re given the certainty we need, see a host of bold, long overdue economic, labour and social reforms being implemented, we can make this work for us.”

“The unrest unsettled the landscape, and impacted market sentiment at a sensitive time,” says Pam Golding Properties’ Carol Reynolds, area principal for Durban Coastal. But she says there’s an air of optimism among some who believe this is a pivotal moment for positive change.

Tony Clarke, managing director of the Rawson Property Group, doesn’t see the unrest as having a long-lasting effect on the market: “Immediate focus has turned to the most pivotal factors, namely the recovery of businesses, getting people back to work, and creating more opportunities to reduce the unemployment, thus contributing to slowly rebuilding our economy and consumer confidence. It’s gratifying to know that there has been some progress, despite all the odds stacked against us with Covid restrictions as well.”