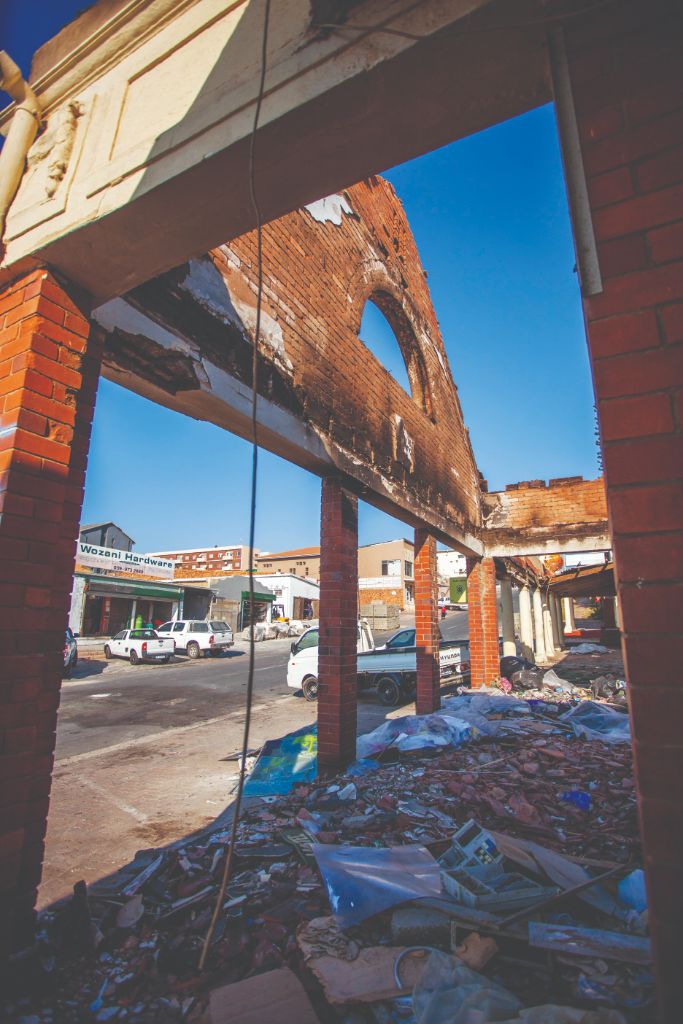 It is time to rebuild KwaZulu-Natal’s shattered economy and if our season of darkness is to give way to a spring of hope, we must first look to ourselves, writes Matthew Hattingh.

If July’s events have taught us any lessons it’s this: business, civil society, communities and ordinary law-abiding citizens cannot “depend on the government to secure property and lives”, yet we daren’t let things lie, leaving politicians and officials to dither.

We must band together and insist that those appointed to leadership in different levels of government are up to the job. And we must find ways to help poor people become self-sufficient and entrepreneurial.

That’s the strong medicine prescribed by Solly Suleman, a pharmacist by profession and president of the Minara Chamber of Commerce. He had no quarrel with black economic empowerment but warned: “If you put people who are not competent in a strategic position, you are going to have a situation where the masses suffer. The ground was very fertile in terms of poverty – people need food, shelter, jobs. We have had enough of incompetent people put into positions. There has to be a move now.”

Suleman, whose organisation represents 1000 mostly Muslim members, said for too long business people had “sat back” in the face of incompetence, corruption and state capture. “How do we ensure our leadership is competent and accountable?” It is a difficult question, but one society dodged at its peril. “These kinds of things (unprecedented rioting) can come back.”

The 67-year-old’s own business interests were among the many that took a knock in the mayhem – though he got off lightly. Sparkport pharmacy, at the corner of Yusuf Dadoo and Anton Lembede Streets in Durban’s CBD, suffered less than R1-million in damage, lost stock and equipment, but reopened a week after criminals bust in. Amid the pandemonium, the group’s Overport branch kept trading, providing an essential service to the long queues of people who came from far for their scripts.

South Africans had shown their resilience, but for thousands of businesses, harder hit or with fewer resources, bouncing back is hard to do.

They would need a mix of grants and loans, said Suleman, who welcomed support initiatives being put in place. These included eThekwini’s proposed rates holiday for affected businesses; a waiving of rentals for traders using municipal sites; and Unemployment Insurance Fund assistance for workers left jobless.

“But it needs to be done quickly and fairly,” he said, suggesting the government rope in a professional entity to handle relief grants in order to speed up the process and avoid abuses.

Insurance payouts were vital for businesses battling to find their feet and here the state-owned South African Special Risk Insurance Association (Sasria), would play a central role as the only insurer that covers claims caused by riots.

Sasria had agreed to comment on measures it was putting in place to deal with a flood of claims. But Rowan Jones, chief executive of Compendium Insurance Brokers praised the insurer. “To date Sasria has responded extremely positively and the insurance industry as a whole has rolled up its sleeves to assist in this crisis,” he said.

He felt some concern as to whether his clients would have the energy to rebuild their businesses and livelihoods, particularly while “poverty and anger” remained a threat.

But, he was buoyed by the knowledge that the “Rainbow Nation resilience is still out there and will fight back and rebuild our country”.

The extent of the destruction and losses from looting were difficult to quantify, with some estimates putting it at more than R20-billion for the KwaZulu-Natal economy alone. Nor does this take into account the fallout on future earnings.

At the time of publication, the South African Property Owners Association – representing commercial and industrial owners – was still tallying up so could not say what percentage of its members had suffered losses, nor put a price to it.

“Overall, we believe about 3 000 stores were looted and damaged,” said chief executive Neil Gopal. Many of these were in malls which proved a magnet for looters, but what relief is there for tenants who may have lost everything? Gopal said landlords were on the rack themselves.

“Property owners (gave) over R3-billion worth of rental relief during Covid and continue to do so. This is not a sustainable situation, especially with the ongoing effects of the lockdowns, restrictions on trading, no economic growth, high unemployment and the effects of the looting spree,” he said.

The association was lobbying the government for relief for its members, “particularly at local level with rates rebates”. It was also engaging with the state on the security of malls. “We believe there should be more visible policing as private mall security is not adequate to handle such volatile situations,” said Gopal.

Getting security right was vital for the recovery and long-term health of the KwaZulu-Natal economy, said economist Mike Schussler. “Look at the burning points and address these with law and order,” he responded to a question on what should be done as a priority. This must go beyond snuffing out the embers of insurrection and jailing instigators (vital though this was, he noted, for discouraging other troublemakers). The free flow of goods must be secured, particularly on the N3 and N2 and to the province’s ports. More highway patrols were needed and security perimeters around bridges.

Like others, including KwaZulu-Natal Agricultural Union chief executive Sandy La Marque, Schussler identified the Mooi River Toll Plaza as a severe risk to the economy. Its relocation or replacement with smart tolling would reduce attacks on trucks.

He predicted a “little bit of a shift away” from KZN and Durban as more road hauliers – particularly international operators – routed cargo through ports in other provinces and neighbouring countries, notably Maputo and Beira, in Mozambique, and Nambia’s Walvis Bay.

He warned of pain for the property market; more marginal businesses folding or electing not to reopen after insurance payouts; and rising costs of doing business, particularly to meet security bills.

If a wand could be waved and the economist was made the province’s potentate with wide powers, how would he fix things? It would be a long-term process, said Schussler, but he offered the following remedies:

The last on the wishlist would be a difficult pill to get down, but these were “drastic times”.

Windfalls of the let-no-crisis-go-to-waste variety aside, were there any silver linings? Stores and warehouses will have to be restocked, torched trucks replaced, goods and equipment imported to replace those stolen or destroyed, all which created opportunities.

“We are just super busy with all this nonsense going on. We have a mountain of work at the moment,” an independent surveyor for the marine and insurance industries told KZN Invest, adding his surveyor colleagues at other companies were “swamped”.

Then there was the repair and reconstruction work. “It is anticipated that in the short term, there will be some work for smaller to medium-sized contractors,” said Vikashnee Harbhajan, executive director of Master Builders KwaZulu-Natal. However, she cautioned that continuing work depended on continued reinvestment by owners and investors and the value of insurance cover in place.

Harbhajan was also concerned about the effect of the rioting on investor confidence and noted that growth in KZN’s construction industry had been on the decline in the past few years and its contribution to gross domestic product had fallen.

“Business and government need to work together to build resilience and restore trust to attract investors to the industry. There needs to be a clear demonstration that the matter has been investigated and measures put in place to mitigate a recurrence of similar incidents. Security measures need to be increased and appropriate business relief implemented,” she said.