“One Love” for Reggae Festival 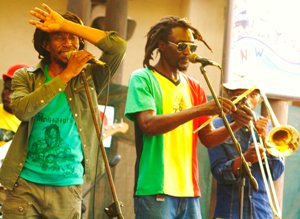 Get into the Rasta groove this February and kit up in red, green and yellow on Sunday, February 9th, to celebrate the Bob Marley Earth Day Reggae Music Festival and Rasta Fair between 10am and 6pm at uShaka Marine World.

In the picture: The Meditators

As part of the worldwide celebration of reggae legend Bob Marley’s birthday, resident band at uShaka, The Meditators, will bring the laid back vibe of the Caribbean to Wahooz on the promenade, along with guest bands including the Azania Band from Cape Town, the Colbert Mukwevho a.k.a. Harley and Rasta Family Band from Johannesburg, Rasta Riddims, Chiozo and David Yaso Bands, to name a few.

The Meditators, based in Durban, are testament to Marley’s massive impact. Formed in 1991, they released their first reggae album in 1993, followed with a second in 2000.

They also performed with Rita Marley and the I–threes from Jamaica at the Bat Centre as part of Women’s Day Celebrations in Durban and were also invited to celebrate 50 years of Jamaican Independence by the Jamaican High Commission in Pretoria early last year and can currently be found performing every Sunday at Wahooz on the Promenade.

Members of the band say that their reggae music appeals to all generations and cultures and their dream is to unite all South Africans through the love of music.

This is the fourth year that uShaka commemorates the massive influence that Bob Marley continues to have on local music and culture long after his death, and this year promises to be bigger and better and a perfect excuse to kick back and soak up the unique rhythms of this Jamaican legend with a chilled cocktail in hand.