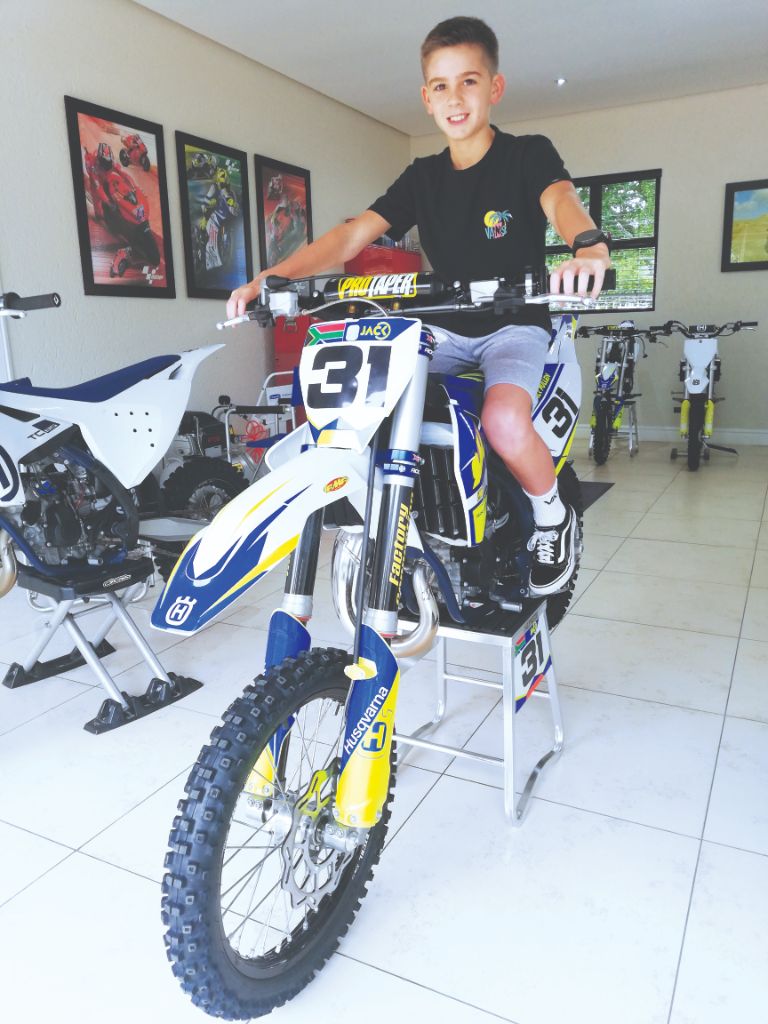 Small in stature, Kloof’s Jack Pullen is a giant on a motorbike, writes David Knowles.

Like father like son and dynamite comes in small packages… These are sayings we use often, but when meeting Kloof’s 11-year-old Jack Pullen, they describe him from head to toe.

Jack is a Grade 5 pupil at Highbury, but his real passion is motocross. And like a superhero who changes his persona when he needs to perform, so Jack moves from schoolboy to fearless rider and competitor when he pulls on his gear, straps on his helmet and climbs on his bike.

“My dad did some enduro and hill riding and I went along, a little guy itching to get on a bike. My wish soon came true and that’s how it all started,” says Jack. “I started riding on a small strip while he was busy, and soon wanted to take it further.”

Despite being so young, Jack has no hesitation in what his future holds. He has one ambition and he stands tall when saying, “I want to become the motocross world champion.” Plain and simple, he has a purpose, a goal, ambition and the determination to embark on that quest.

“I started riding when I was eight. Unfortunately, motocross is not a huge sport in South Africa. We get 200 entries in my age group here, whereas there are 5 000 in the US – meaning riders must qualify to race,” says Jack.

Currently, Jack rides in the 65cc class and this year he will compete for the championship in the US later this year, a big step for him and a new experience. “It won’t be completely foreign as I have been in the US a few times riding in local races, but not competing for anything – just getting a feel for what it’s about, how competitive it is, the conditions and the style of racing,” he says. “We did what is considered a small race, and it was bigger than the South African Nationals.”

In 2018 Jack gave an indication of his prowess when he won the Regional (KZN) 50cc title as a rookie, awarded his KZN and Protea honours in the process – a rare achievement. The US is a challenging move for him, but he remains quietly undeterred.

“I will take my racing bike with me and a spare engine, plus some parts. At least I will be on a bike I am familiar with,” he says.

Jack’s race number is 31 and therein lies another story. “I originally wanted 41, the number Brad Binder had, but that was already taken, so 31 was next best. I have met Brad three times and what he’s doing in Moto GP, I want to do on the dirt,” says Jack.

A whole new lifestyle awaits Jack. He will become a full-time online learner and the family plans to move to Florida by June/July. Jack has their support, and he will be racing the full South African season plus the bigger American events in the 65 and 85cc classes. It means plenty of travelling between the two countries, but in chasing his passion nothing will deter Jack.

He’s had his fair share of mishaps, including an open skull fracture with subarachnoid haemorrhage. But when he’s not surrounded by his bikes, Jack enjoys his radio-controlled car, Playstation where the motocross games take preference and spending time with Bubbles the family pooch.

There’s also his coaching, diet, plus gym that gets done. But there’s no stopping him from opening the throttle. It comes down to wanting something so badly; the sacrifices are barely noticed, unlike Jack who will no doubt be noticed on the motocross tracks of the world.