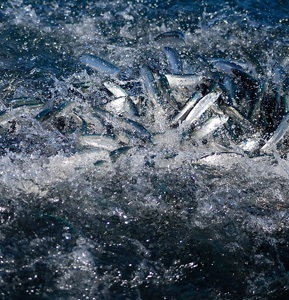 Wednesday morning, 4 July, broke with a flurry of activity on the Durban beachfront with numerous shoals of sardines making an appearance from just behind the surf zone to about 500m offshore.

Unfortunately most of the seine netters were searching for sardines on the south coast at the time and it took about 2 hours before they arrived in mass. At one stage 7 netting boats were out on the water off Durban’s Golden Mile. However, by mid-morning the warm moderate berg wind made it impossible to spot the shoals.

Most of the netters returned to the beach by midday due to these conditions. A strong south-westerly wind was expected in the afternoon, but should move on by Thursday morning.

Judging by the number of shoals of fish that were seen off Durban Wednesday morning, there is a strong possibility that seine netters will try and net in the Durban beachfront and northern beach areas on Thursday, weather conditions permitting.

Although there appears to be minimal predator activity accompanying these shoals, nets have been removed from the most northern beaches on the Durban beachfront as a precautionary measure.

Bathing remains open from Suncoast Casino beach to uShaka inclusive. Sharks Board staff will continue to monitor this rapidly changing situation on a daily basis and remove and replace the shark safety gear as required.

The south coast was fairly quiet with the exception of a few small pockets of sardines in the Ramsgate area. Shark safety gear is out of the water on the Hibiscus coast at this time however staff will continue to monitor these areas and reinstate gear as soon as the activity permits.