SCASA National Coffee Championships to be held at Lifestyle Centre 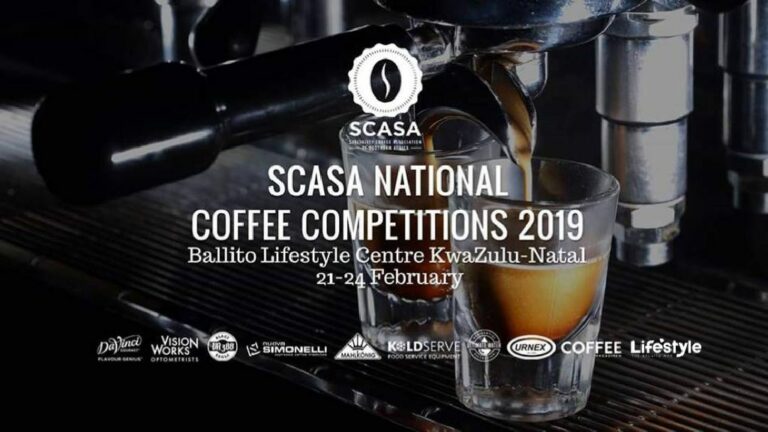 Lifestyle Centre has confirmed that the SCASA (Speciality Coffee Association of Southern Africa) National Coffee Competitions 2019 will be held at the centre this month, from 21 – 24 February, culminating in the finals on Sunday, 24 February.

Forty Regional Finalists from all over South Africa will vie for the title of National Champion in three categories (Barista Championship, Latte Art Championship and Cup Tasters Championship) and go on from this competition to represent South Africa at the World Coffee events. The World Barista Championship, to be held in April 2019 in Boston, USA, is the world’s most prestigious barista competition, welcoming participants from over 50 countries who have won their regional and national- level competitions to represent their domestic coffee talent on the world stage. Berlin, Germany, will play host to the newly crowned Cup Tasters and Latte Art Champions later in the year.

Twenty-five judges, including a number of renowned international specialists, will make up the panels that will be tasked with watching and scoring the movements and techniques of the contestants.

According to Bruce Rencken, owner of Lifestyle Centre, “Following the success of the Regional Championships which we hosted a few months ago in The Market, we’re so looking forward to hosting these National Championships. Coffee has become such an integral part of our lives and, at Lifestyle Centre, we go out of our way to create a brilliant atmosphere for family and friends to meet and connect over a cup of coffee. We’re thrilled to be hosting the masters of this art in South Africa.”

The competition will be held in the covered area outside Weylandts, running the length of the area from Hair 4 U to LOAF Café and Gin Bar. Says Centre Manager, Mark Pearse, “Two stages will be set up with ample seating for spectators and we are planning for a great vibe during the course of the competition. It’s easily accessible from the undercover parking and close to both The Market and Eat Street for people from further afield wanting to make a day (or longer) out of it. We’re excited to be able to support the various baristas and coffee specialists in their quest to be crowned National Champions.”

Bernard Muneri, SCASA chairperson, gives some insight into the three categories in the competition:

block has 3 coffees, of which 2 are the same and one is different. The competitors need to identify the odd one out, and the fastest taster with the most correct cups identified, is the winner.

Having been on the organising committee of the Regional Championships held last year at The Market, Bernard is happy to be back with the National Competitions at Lifestyle Centre. “It’s a great venue and such a warm and welcoming place for our finalists to showcase their skills,” he says. “The North Coast public will have the opportunity to meet some of the country’s best coffee talent and the action promises to get pulses racing – not just because of the high caffeine content!”

If you have ever wondered about the world of Speciality Coffee, this is your chance to pick the brains of some of the best in the business from 21-24 February at the Lifestyle Centre, Ballito.

For more info on SCASA and the competition, go to www.scasa.co.za. Follow Lifestyle Centre’s Facebook page at www.facebook.com/ballitolifestylecentre/ for updates.`

WIN One of 10 Boxes of Society Mochaccino