Spread joy by giving a toy 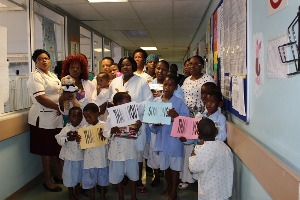 The campaign brightens up the lives of children in state hospitals across KZN, by giving them each a new toy

Children in KwaZulu-Natal are helping bring smiles, cheer – and hope – to less fortunate children across the province, by taking part in one of KZN’s biggest charity drives: East Coast Radio’s Toy Story with Game.

Photo: The campaign brightens up the lives of children in state hospitals across KZN, by giving them each a new toy

Many schools have already chipped in to help collect new toys for thousands of little ones who are in government hospitals, crèches, orphanages and children’s homes. Chelsea Primary School, Northlands Girls High School, New Forest, Queensborough Pre-Primary School and Amanzimtoti Primary School, and John Wesley School in Eshowe are among the schools that have already asked for campaign collection boxes.

If your school would like to make life a little better for some of our province’s most disadvantaged children, please request a Toy Story collection box by emailing toystory@ecr.co.za and they will make arrangements to have a box delivered to your school. They will also collect the new toys once the box is full.

Schools have until 8 December 2014 to collect new toys.

The top three schools that collect the most new toys will go into a lucky draw. The winning school will have the honour of proudly displaying the Toy Story Trophy for a year, while 25 pupils from the school, who gathered the most new toys, will each win an exclusive tour at East Coast Radio, Game stationery packs and Wakaberry vouchers.

Last year, ‘Maritzburg school, Deccan Road Primary, set a campaign record by winning the Toy Story Trophy for a third consecutive year! Pupils there donated 3,027 new toys to the 2013 campaign – that’s double what they donated in 2012! Principal, Mr Siva Gounden, told East Coast Radio, “I am very proud of my pupils learning to give back to society at a young age and I hope this stays with them for the rest of their lives.”

In 2013, East Coast Radio’s Toy Story with Game distributed 45 000 new toys to ill and disadvantaged children across KZN. More than R1.4 million was donated to the campaign, every cent of which went towards buying food parcels for child-headed households in the province, to make sure the children have enough to eat over the long December school holidays.

Make hope a reality by donating today. Give joy. Give a toy.

You will find more info, including details on how to make cash donations, on www.ecr.co.za.