Sterling EQ For One Night Only! 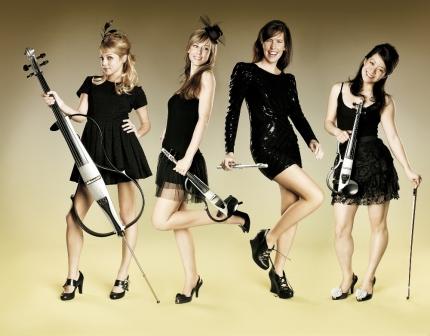 A one night only award-winning instrumental showcase at uShaka with Sterling EQ!

Durban audiences are in for a treat when SAMA-winning instrumental pop group Sterling EQ brings their eclectic mix of instrumental showstoppers and exquisite melodies to The Upper Deck Restaurant at uShaka Marine World for one night only, on Friday 15 June.

Known for changing the face of instrumental music in South Africa, the all-woman quartet – who is on the eve of releasing their third studio album – fuses diverse musical styles such as Classical, Kwaito, Pop, Rock and World, into their own distinctive and contemporary sound which is complemented by their energetic, visually arresting live performance.

In 2011 they became the second all-woman group to win an SA Music Award (SAMA) within the last decade. Their groundbreaking contribution to the local music industry has earned them many fans and accolades from across the world, with the success of their social networking sites (21,500 fans on Facebook, and their You Tube channel being the 19th most subscribed SA Music channel) cementing the fact that Sterling EQ is a proudly South African act with huge international appeal.

Their award-winning live show contains a collection of Pop-classic showpieces including Toccata Rock, Jazz-inspired instrumentals like Chic Corea’s Spain, South African hits like Mbube, Nkalakatha, and Mannetjie Roux, as well as originals including their hit song (and debut album title track) Nova, which was also made into a Hollywood-style music video which enjoys local and international airplay.

Other highlights include a tribute to pop violinist Vanessa Mae, a “sterling” version of the Mission Impossible theme, and a breathtaking instrumental version of the Italian love song, Caruso.

Best you diarise now, in order not to miss out on this sultry show of Sterling EQ performing live in a ONE night only affair at uShaka’s Upper Deck Restaurant this Friday.

Tickets cost only R250 per person, including a full buffet from 6pm before the 8pm show, and can be booked through Upper Deck Restaurant.