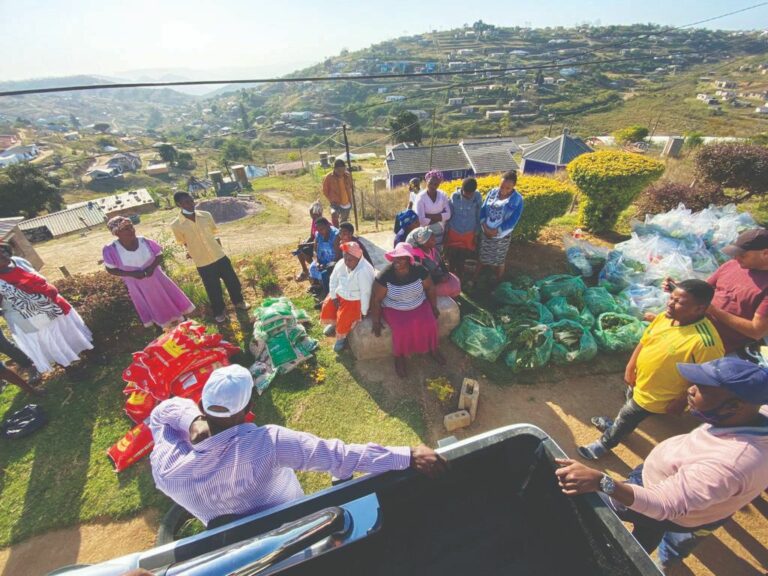 While many communities and areas in Kwa-Zulu Natal are still feeling the after-effects of the July riots and looting that swept the region, there is one area that claims what was born out of this traumatic and potentially divisive time has been an inspiration and blessing.

Meetings of the newly formed Outer West Business & Community Initiative (OWBCI) have continued to take place with the intention of servicing and uniting the entire community and businesses of the Outer West region of Kwa-Zulu Natal – including the areas of Embo, Kwanyuswa, Molweni, Hillcrest, Assegay, Kloof and Shongweni.

According to Cotswold Downs’ CEO, Shantelle Walters, the formation and continued success of the OWBCI since the dark days of the riots, epitomises the resolve of the human spirit and captures the true essence of ‘ubuntu’. “What started out with residents from Cotswold Downs joining forces to protect our estate and surrounding areas from the violence and chaos that unfolded during the July riots, soon turned into a bigger and more powerful union of business and community leaders from all areas of the Outer West region with a common goal of protecting the livelihoods in the greater Outer West area – not only during the riots but going forward,” says Shantelle. “It has been inspiring to see how many of our own homeowners have given selflessly of their time and resources to empower and support the SAPS and Community Policing Forum (CPF) for the good of the greater community.”

Since the formation of the OWBCI at the beginning of September, some of the impressive initiatives undertaken to date include the repair of fourteen previously unroadworthy SAPS vehicles – with ongoing maintenance being offered to the local SAPS free of charge by Halfway Ford Waterfall, CMH Nissan Highway, Tyremart, Alpine VW and SMG Toyota Hillcrest. Two vehicles were sponsored for 12 months by SMG Toyota and Alpine Renault, as well as office space from Richdens Centre in Hillcrest for the CPF. Approximately 20 tonnes of fresh and dried food were distributed through three separate organised events to the broader community, feeding close to 4 000 people over a two-week period. R5 000 was sponsored by the Taxi Association to Ubizo (a local NPC) to go towards books at the first library to be established in the valley.

According to the founding member and mastermind behind the formation of the OWBCI, Nick Nzama, who originally hails from a chicken farm in Assagay, and his mother, who currently resides in the valley of Kwanyuswa, the far-reaching impact of forming the OWBCI goes beyond the donation of time, money and resources that the community has benefited from to date. The OWBCI strives for social cohesion and to provide a platform where everyone’s voice is heard. Registered as a not-for-profit company (NPC), the initiative has already taken some remarkable strides towards positive change within our community and is gaining momentum.

“Our role in the engagement between SAPS, Metro Police, community safety companies, Community Policing Forum (CPF), neighbourhood watches, the Taxi Association, and other community and business representatives, is serving to create a new security support structure. Apart from bolstering resources of our local SAPS and helping to revive the old CPF structure, we are also excited about the work being done in partnering with local NPOs to effectively target community requirements. Efforts are also underway to engage Outer West businesses so that they may better understand the existing barriers to economic development within the surrounding communities, allowing them to identify opportunities to facilitate and support economic development within the valley. We believe we are #StrongerTogetherOuterWest, so we are encouraging all businesses and individuals within the Outer West region to support the initiatives we have underway by staying connected through our newsletters, Facebook page and website, to see how they can assist through time, money, expertise or resources to rebuild KZN while creating a thriving community. Ultimately we want to stop making walls higher and rather make tables bigger,” explains Nzama.

When asked about the OWBCI, Tsepo Mkomo, Assistant Director of the Department of Community Safety and Liaison, believes the support shown from local businesses will “assist the CPF to carry out their mandate effectively and efficiently. It will also bridge the gap between the community and SAPS, as the police are unable to solve crime without support.”

The Chairlady of the CPF, Tracey Lynch, has also thanked the OWBCI saying; “We have now been given the facilities and amenities to go ahead and do better for our community, and get our CPF to full capacity.”

“The work that is continuing to be done to uplift and empower everyone living in the Outer West Community by the OWBCI is incredible. We are so proud of our residents who have displayed true leadership and the spirit of ubuntu through their contribution to this game-changing movement, that we believe could become a blueprint for other areas and communities in KZN, and even nationally, to follow as we continue to actively work together and re-imagine our community eco-systems. We are committed to continue supporting the efforts and vision of the OWBCI because we want to see a united South Africa that draws communities together for the stabilization and betterment of all,” concludes Walters.