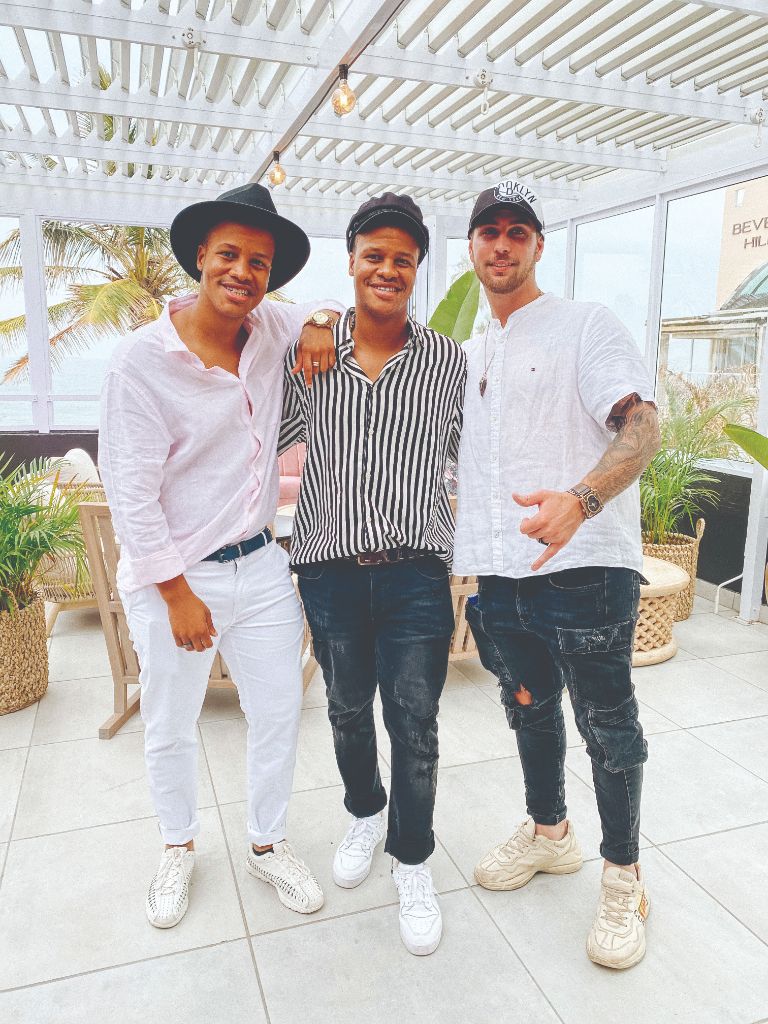 Danté has come to town, and it promises to flip uMhlanga on its head. One restaurant, five bars, one rooftop – it’s next level, clearly, writes Anne Schauffer.

One thing’s for sure. Interior designer Alice Colle let her hair down when transforming the uMhlanga stalwart, Ile Maurice, into triple-storey Danté! With a brief from her clients which had “unique, bold and off-the-charts” written all over it – “think Annabelles in London” as inspiration – Alice had eight weeks to pull Danté out the bag.

With 195 restaurants in uMhlanga, Danté needed to be “everlasting”, which is precisely the translation of the name.

Brothers – and twins – Andile and Ayanda Ngidi, are co-owners with friend, Trent Varejes. They bring different, complementary skillsets to the mix, but they share the same passion for entrepreneurship, hospitality, and food. During university, Durban-born Ayanda and Andile did the usual university thing… as barmen and waiters. Post-university, they launched their working lives with pop-up eventing – The Social Pop-up Event Co-ordination Company was theirs.

Young and inexperienced, they discovered that relentless hard work and a grim determination to be better than the best, was the only way up. They also discovered they really enjoy people and creating events that pull people together.

The brothers have been friends with Johannesburg-born Trent for 10 years, the three of them hitting it off from the outset. Today, they call themselves family friends and Trent’s dad has not only shared his entrepreneurial bug with his son, but with the Ngidis too: “We’ve absorbed so much of value from Trent’s dad, Gavin,” says Ayanda.

“We had a triple-storey venue in our sights and on our vision board from around 2009. When this opportunity came up, we called Trent, presented him with an idea for a multi-storey, multi-function venue on the Ille Maurice site (which was available for long-term lease), and he was in.”

Alice got the call. She laughs, “Eight weeks, that was it. And we weren’t going to erase Ile Maurice either. It was an institution, and we wanted to retain some of that vibe.”

The trio realised they had to be ready to open the doors by the end of November: “Not just ready,” says Ayanda. “But phenomenally ready.”

Alice thought, “something tropical, over the top”, but although there’s a thread which runs throughout Danté, each corner, space and room features different fabrics, textures and wallpapers – plus 170 pieces of Victoria Verbaan art line the walls.

From the ground, climbing up the next two stories, popping into the different levels, bars and venues, is not unlike the wonderful thrill and surprises when you travel. Step inside Danté’s island-style veranda, and you’ll find a Main Restaurant and Bar, Gin Garden, Cigar Bar, Oyster & Champagne Bar, Signature Bar and Rooftop Bar with 180-degree ocean views. Each has its own signature flavour.

Alice retained the existing restaurant tiles, balustrades, basins and a few mosaics as the base on which to build: “The moulded pressed ceilings provide a great deal of character, layered with bold wallpapers, art, velvets, linens, chandeliers, chunky bamboo blinds, elegant light fittings and furniture.”

Danté is a riot of colour, and if you ask Alice which dominates, she smiles: “We used a lot of pinks, greens, blues, golds, and natural tones. Pink is such a happy colour and creates so much excitement. The natural tones add a certain calmness, and the others simply create interest. I think every colour under the sun has been used in this project – however, it all seems to work together like a beautiful piece of tapestry.” The decor in a nutshell? “Bold, grand and over the top.”

When it comes to the menu, it’s a mix of Mediterranean and Italian, with a South African twist. Andile and Trent in particular roll up their sleeves, or rather, their culinary imaginations. Andile spent a short time at KZN’s International Hotel School focusing on front of house, but he thinks big – peeling and chopping was not for him. He, like Trent, enjoys food. They brought in specialist and legendary chef Marco Nico (sadly deceased) who, together with the boys, established a blueprint for the kitchen.

Ayanda says, “The name Danté is Italian, so there was always going to be an Italian influence. One of Trent’s family businesses is Tightline Fisheries and Trawlers, so we offer the freshest, widest range of seafood … alongside our pizzas, pastas, you name it.”

Trent’s a mere 22 years old, but you’d never know it. He’s been working alongside his dad as well as on his own successful projects, so he’s way ahead of the pack.

“As Danté comes from ‘everlasting’,” says Ayanda, “when we branded the restaurant, we named it the Danté Experience. We don’t want to pigeonhole it, this is phase one of something which will never stop evolving.”

They opened during a pandemic which, although challenging, has given them the time and space to fine-tune everything: “What you see is just the start of what we’re going to be building on. Phases two and three – watch this space.”

Whether you’re keen on a mocktail or one of the finest freshly squeezed juices, plan on a pub crawl, a seafood dinner or a bespoke meeting place or out-of-this-world function, the Danté Experience can be whatever you want it to be. *