The sardines are coming 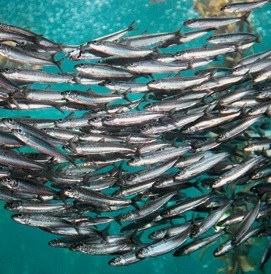 Hopes are high that the sardines might reach Durban this year

KZN Sharks Board staff undertook the second sardine survey flight from Virginia to East London on 22 May 2012. The activity that was fairly intense last week off the Waterfall Bluff area in the northern region of the Eastern Cape appears to have subsided and disappeared.

Very few signs of sardines or associated predators were evident. Although a disappointment to the team this type of “here today gone tomorrow” activity is a common scenario with the early smaller shoals of sardines. These fish may well have moved back southwards or further offshore. Waterfall Bluff is a well-known holding area for sardines and is situated approximately 55kms south of the KZN Eastern Cape border.

The activity noted further south was as expected, with large concentrations of Cape gannets and dolphins seen feeding off Hole in the Wall, Dwesa Nature Reserve, Mazeppa Bay and  Cintsa, which is just north of East London. Hole in the Wall is approximately 140kms south of KZN.

The water clarity off the Eastern Cape Coast is extremely good at present with an estimated visibility of in excess of 25 metres. The KZN Sharks Board expect the sardines to continue moving northwards but cannot speculate on their expected arrival date for the KZN coastline at this time.

These fish are notorious for delivering surprises with their arrival onto the  KZN  coast and the Sharks Board will continue to monitor the progress of the larger concentrations of these fish.  Shark nets off Port Edward, TO Strand and Leisure Bay remain out of the water, however, drumlines are being baited as normal. Discretionary bathing remains in place.

For more on the KZN Sharks Board, visit www.shark.co.za