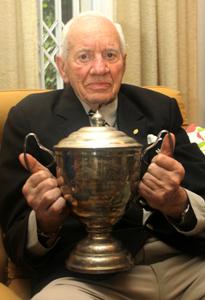 The 2015 Dusi Canoe Marathon's charity batch will be named after the late Dr Ian Player and a contribution from this will be made to the Rhino Foundation.

Just a day after a large group of paddling enthusiasts, conservation colleagues, friends and family gathered at Hilton College to say their final goodbyes to the late Dr Ian Player, the Dusi Canoe Marathon has confirmed that this year’s edition of the race will honour Player by dedicating the charity batch to the race founder and raise funds for the Rhino conservation project that he championed.

Dr Player started the Dusi Canoe Marathon in 1951/52 and shaped the South African conservation landscape greatly before he passed away on 30 November last year.

Around seven hundred people attended Wednesday’s memorial and Natal Canoe Club General Manager Brett Austen Smith was pleased to see many familiar faces in the crowd, while he also looks forward to this year’s Dusi doing their bit to salute the great man’s life.

“People from all over the world flew in for the memorial and there were probably ten times the number of those that attended who would have liked to have been there but unfortunately couldn’t make it,” says Austen Smith.

“Dr Player paved the way for the Dusi’s creation and it was great to see so many paddlers, young and old, come pay their respects to Dr Player.

“We look forward to this year’s race being paddled in his memory while the race’s charity batch will also be known as the Dr Ian Player Memorial Charity Batch.

“A third of the proceeds raised by the charity batch will be donated to the Rhino Foundation, a project Dr Player held very close to his heart,” he adds.

Participants of this year’s Dusi can also look forward to receiving a Dr Ian Player memorial paddling cap, while the race will also be selling black ribbons; these proceeds will be added to its charity batch contribution to the Rhino Foundation.

The memorial was a fitting service, with many references to both Player’s influence on the Dusi and South Africa’s conservation scene being made in the tributes.

“Conservation obviously came into all of the various speakers’ messages. However, a few also referred back to how Dr Player in fact first became involved in conservation due to his involvements with the Dusi,” describes Austen Smith.

“Having been involved in – and the only person to complete – the very first Dusi in 1951, Dr Player returned back to work late and was fired on the spot, which resulted in him taking up a job with the Natal Parks Board; and so his passion for conservation was born!”

Wednesday’s service closed with a fitting ‘missing man formation’ tribute familiar to those in aviation circles.

“The final message of the day was probably the most powerful one though, that everybody now needs to continue Dr Player’s legacy and we certainly hope to do so in as fitting manner as possible at this year’s Dusi,” says Austen Smith.

The 64th edition of the Dusi Canoe Marathon takes place from Camps Drift in Pietermaritzburg to Blue Lagoon in Durban from Thursday 19 to Saturday 21 February 2015.

More information can be found at www.dusi.co.za.