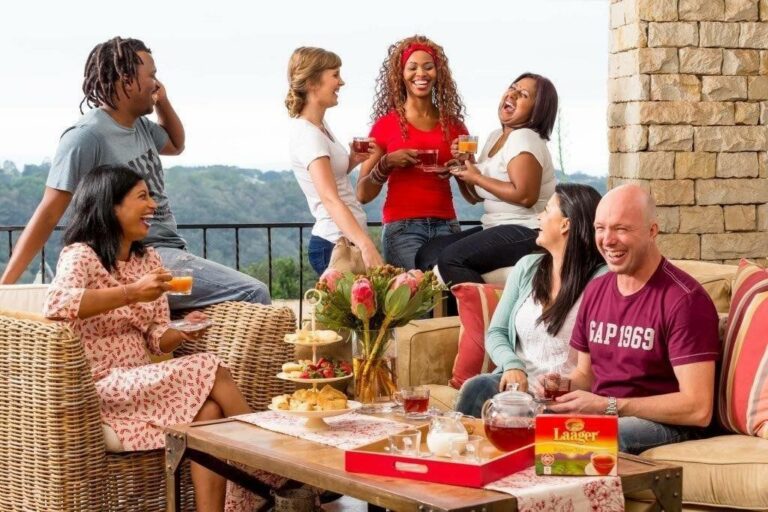 The hamper consists of 1 x tea box, a tea towel, Laager Rooibos range and a copy of Lebo and Tebo’s cookbook, ‘Food Stories’.

THIS COMPETITION IS NOW CLOSED!

CONGRATULATIONS TO THE WINNER – BARBARA COETZEE!!

In typically South African fashion, many of the flavourful responses included food and drink, with comments like: ‘Nou gaan ons braai, ‘Umqombothi’, ‘Magwinya, atchar, polony and tea’, ‘Braaibroodjies, bonfire and hoezit!’, ‘Uphutu and Amasi’, ‘I love my kota with Russian and chips’, ‘Pap, wors and chakalaka and a hot Laager Rooibos Tea’, ‘Don’t throw away that ice cream container, ‘I make beef potjie and a nice cup of Rooibos tea and delicious koeksisters’, ‘Sugar water’, and ‘Last number kota with a cup of Laager Rooibos’. One Laager fan commented that ‘It means waking up to the fire burning outside while the porridge is cooking. Sitting around the fire at night listening to old tales told by uGogo. Watching the sunset behind the scarred mountain. It means helping others when they are truly in need because Ubuntu lives in us’.

We wouldn’t be South African if there wasn’t some humour thrown in there, with one Laager fan commenting that ‘We have virtual family meetings once in a while headed by the president’, and another noting ‘I put many plastics in one plastics bag’.

“Being South African means so many different things to so many different people. Despite our differences I believe if we consistently work together, we can overcome whatever adversity we face,” said Wandile Ngubane, Laager Rooibos Brand Manager. “We are a nation of triumph and rebuilding – believing that no matter how dark the days get, the sun always rises again. We remain constantly interconnected by a deep love for this truly unique place no matter what walk of life we are from, because there really is no place like home.”

Candice Sessions, Laager Rooibos Marketing Manager, added that despite the challenges, being a South African is always a source of pride: “Maybe it’s because we are the only ones who understand the road we have walked, and for that we have a kind of begrudging but enduring respect for ourselves and for each other. And even those who leave often say that nowhere else ever truly feels like home. As a company that has built itself on the growth of Rooibos – one of South Africa’s biggest natural local jewels – we are so grateful to be part of the South African story.”

Established in 1945, Laager Rooibos has been a staple in South African homes for generations, which is why it carries the motto ‘Strength is our tradition’. To celebrate Heritage Month, as well as the rich blend of cultures and traditions found in this country, Laager Rooibos has shared a poem that captures some of the essence of what it means to call South Africa home.

We are a country of defying the odds

Of winning world cups after losing the first game

And captains who come from nothing but give everything

Of robots that aren’t robots

And bunny chows where no bunny was harmed

Where Nkalakatha made the weekends special

We are the country of Simunye We are One

Chappies Did You Know

Where WWE Smackdown was a weekend obsession

And John Cena is immortalised in song

With an uncle in the furniture business

And Husky dogs that always will be

We are the country of rolling Rooibos fields

And deep fried everything

We are the country that loves to laugh

And that learned the hard way to laugh at ourselves

Of pick a box

And Riaan Cruywagen who never ages

We are the country of rivals that share Nobel prizes

Of scraping through by the skin of our teeth

And flying by the seat of our pants

We are the country of Madiba

Of Desmond Tutu and Ahmed Kathrada

We are the country that gets knocked down and rises

That lives in you long after you’ve left

We are the country of recovering and rebuilding

And hoping and praying

And then doing it all over again

For more information, or to discover healthy tips and recipes from Laager Rooibos, follow @LaagerRooibosTea on Facebook and Instagram or visit www.joekels.co.za. For recipe ideas from twin chefs and Laager Rooibos ambassadors Lebo and Tebo Ndala, follow @withlovefromthetwins.