Laughs are a Bonus 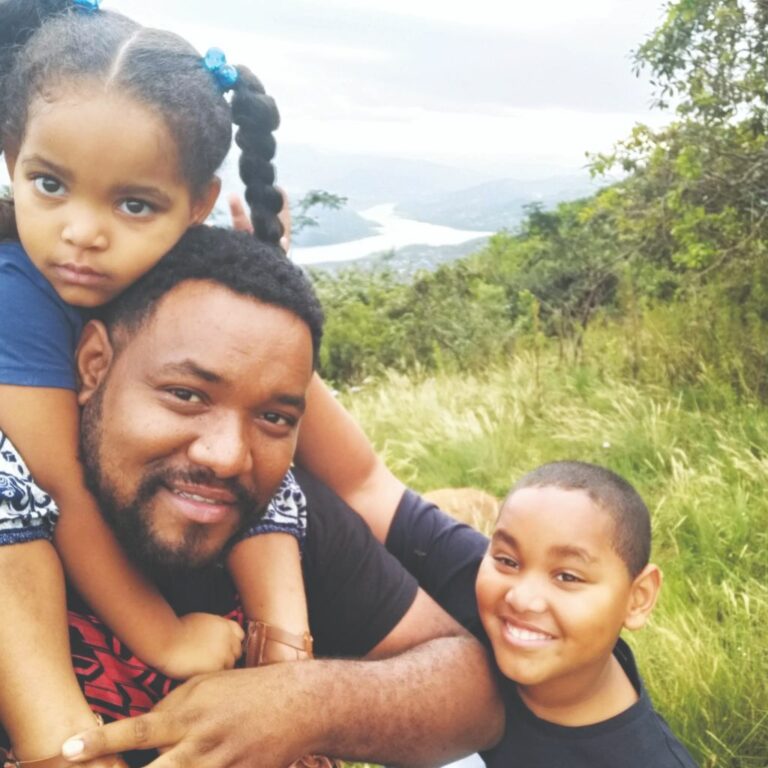 Carvin with his children, Kara and Jakin.

Carvin grew up in Newlands East. “It was tough, and a dangerous environment for a child to be in – with lots of gangs and wars between rival gangs,” he says. “But my parents did a lot to make life easier for my sister and I.”

At only 16 he started studying towards a journalism diploma at Durban University of Technology. “I was pretty young, everyone around me were older. But it was an experience, more about culture than anything else,” he says – adding that he learnt a lot about journalism working at The Mercury, Independent on Saturday and eNCA.

In 2006 Carvin entered a comedy competition called Madras Masala, held at Sibaya Casino. “At that point I used to make lots of jokes in the office impersonating people. Colleagues kept telling me to leave journalism and pursue comedy,” he says. Carvin’s father took him to the competition, where he was the last person to go on stage. “I only took me about a minute to realise I was exactly where I needed to be – and that was that! I accepted my fate.

“I spoke about myself, I spoke about my father who was a taxi driver. I spoke about living in Durban,” says Carvin, who feels that winning this comp was for him a sign. “Not so much the winning part, but the way I felt on stage,” he says. There wasn’t much happening in Durban comedy-wise back then, so in some ways, the journey Carvin found himself on was all about creating opportunities as he went along.

“I stayed in my job, pursuing this new part of my life on the side. I won a trip to England, but it involved committing to a contract, which I didn’t want to do. I wanted to do this on my own. And knew I would get to England one day, some other way.”

Comedy has taken Carvin all around the world, doing shows in Asia, Australia, the Middle East and Southern Africa and more. “The Comedy Lounge in Perth is the best comedy gig I’ve had outside SA. But there are also great comedy spaces across Asia, and Museum of Comedy in London is great,” he says.

Carvin’s parents and sister moved to England in 2001, while he was still studying. “The last time I saw them was when I did a show in London, in 2019. It was the first time my parents sat next to each other watching me perform, it was wonderful.

“Comedy is a subjective thing, so you explore your point of view with an audience happy to receive it. Your audience finds you, they see things the way you do. Basically you become a community based on your perspective on humour,” says Carvin – adding that the favourite part of his job is to bring comfort. “That’s why I do it these days. Laughs are a bonus.”

Carvin lives in Hillcrest and has two children, 12-year-old Jakin and six-year-old Kara. Three years ago he met Carmen James, and they are getting married later this year. “I take inspiration from my kids and my partner,” he says. “My son is a particularly thoughtful

human being with great EQ. Even though he’s only 12, he helps me be a better human. My daughter is highly confident and I find observing her in real time helps me work on my own self-confidence. My partner Carmen is extremely intelligent, I love listening to her explain things. She’s a doctor and she definitely inspires me to learn more.”

Outside comedy, apart from also offering MC and speaker services, what makes Carvin tick is second hand or auctioned items, architecture and real estate. “I spend hours on these hobbies,” he laughs. “If I wasn’t doing comedy, I’d probably do something within the lines of interior design or architecture, or maybe construction. That space for sure.”

Carvin is happy with where his work has taken him and satisfied with where he is right now. “I’ve achieved more than I’d hoped, and received more than I deserve in this life,” he says. “But as far as the future goes, I’d love to find some rhythm post-pandemic, so I can get back to live auctions.”

Any advice to up and coming comedians? “Comedy is broad today. You don’t have to be on stage. We started on stages, because you couldn’t start on social media. So just leap, you’ll find your audience.”

After the destruction of recent looting and riots, Carvin used his platform – with over 81k followers on Facebook – to rope in people to help clean up between Springfield Park and Nandi Drive. “I got a few friends together from the UH area, and realised we needed brooms, packets etc. So I did some lives on site, on Facebook, calling for support. At that point it was still raw from the riots, it looked like Armageddon. The visuals were quite dramatic. People started coming out, and as the days rolled on many of those who saw my lives joined us to help. It was very empowering to turn things around.”
Picture: Kierran Allen