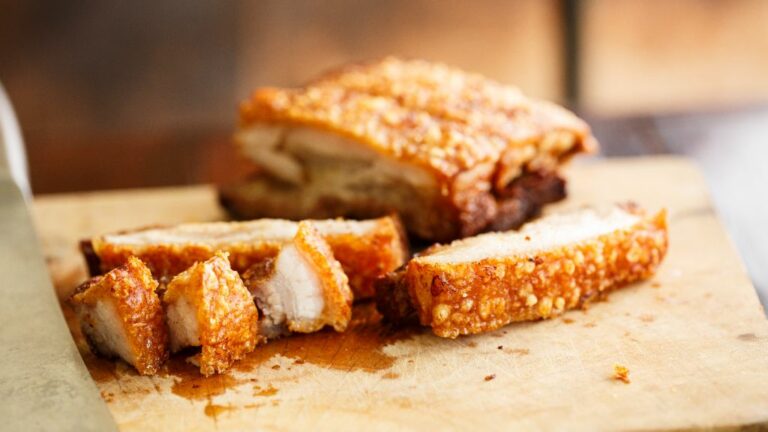 I didn’t start out as a fan of air fryers, but slowly, and with experimentation, this way of cooking has its merits, writes Ant Ellis.

Eish. The air-fryer dilemma plagued Karin and I for a good year-and-a-half before we caved in to the not-insubstantial peer pressure (well, mostly people saying ‘how can you not have an air fryer?’) and joined the locked-down masses – starved as much for something delicious as for inspiration – in an investment. At the time, it felt like I was committing cooking treachery, that this purchase was an all-too-trendy betrayal of everything I had learnt at culinary school … ultimately that I had thrown technique out the window in favour of a convenient and new-fangled kitchen gadget. Plus, most of ’em look kinda hideous in my kitchen work area. Hmm.

So what’s the verdict? Did we find a shortcut to culinary nirvana? In a word, no. There’s obviously nothing an air fryer can do that we couldn’t do before, but there are some definite benefits to owning one – not the least of which were cutting frying oil out of lots of tasty everyday foods and some proper speed. Oh, and the guilt associated with eating French fries by the bucket was pretty much halved.

At the end of the day, an air fryer is a convenience gadget that makes food crispy without the oil, pretty fast – I have made peace with it on that basis alone – but they’re more valuable than for pubby frozen chips, meatballs and samoosas. You actually can roast a chicken beautifully, many owners bake muffins and cookies in theirs, and I’m trying new things every week (crispy, spicy chickpea snacks anyone? Google it).

Get an air fryer, or don’t. If you’re on the fence, I wouldn’t push you either way. But if you do own one, I would encourage you to try some new things. Chicken pieces rubbed in paprika, oregano, lemon zest-infused salt and pepper, with a salad. Asparagus tossed in garlic, oil olive oil and seasoning, then topped with grated Parmesan and a squeeze of lemon juice. And yes, try baking a batch of New York style chocolate fudge cookies. You’ll be very, very pleasantly surprised.

Here’s something I did recently that a chef friend of mine recommended. Could this be the push I needed to fully embrace this terrifying new paradigm? It felt risky. I backed out and recommitted. My brothers were there for me as I worked myself up for the big day. I went for it. And it ruled.

There are two important steps you don’t want to miss when prepping this recipe. Firstly, you absolutely have to score the rind. This should be almost as deep as the rind itself, in a cross or diagonal pattern of about 1,5cm between cuts with a sharp knife. Secondly, this must rest uncovered in your fridge for as long as possible (minimum 4 hours, but overnight to 12-14 hours is preferable). Moisture is the absolute nemesis of crispy crackling, so don’t skip either of these steps.

Preheat your air fryer for 6 minutes. While preheating, mix together most of the salt, most of the pepper and all the baking powder, then spread over the pork rind, getting into every nook and cranny. Season the underside with a touch of salt and pepper and olive oil. Flex the pork to open up the cracks. Set the pork in your air fryer (highest shelf if you have a front loader) and cook at 160º C for 35 minutes. Carefully give your porky dude a flex and then push the heat to 200º C, and cook for a further 10-20 minutes, checking regularly until you’re satisfied. The crackling may not puff up, but tap with a knife and you’ll know when it’s crunchy. Remove and rest.

Disclaimer: Results, of course, may vary as air fryers models do. If you have a meat thermometer, you’re looking for a minimum internal temperature of 65º C.

Serve this as a classy Sunday roast with gravy, roast potatoes, apple sauce, vegetables and yes, you most certainly can pair this with a full-bodied red wine. If you’re feeling adventurous, sliced for a sweet and sour, crispy, crunchy Vietnamese-style bahn mi sandwich on a crusty baguette will blow you away.

Until next time: If all you’re doing is French fries in your expensive air fryer, that’s cool with me. But don’t say I didn’t at least try. Veggie fans, fear not. I’ve got something up my sleeve for you soon.

FOR MORE INFO: Talk to me at ant@rockthekitchen.co.za