The Pride of Africa 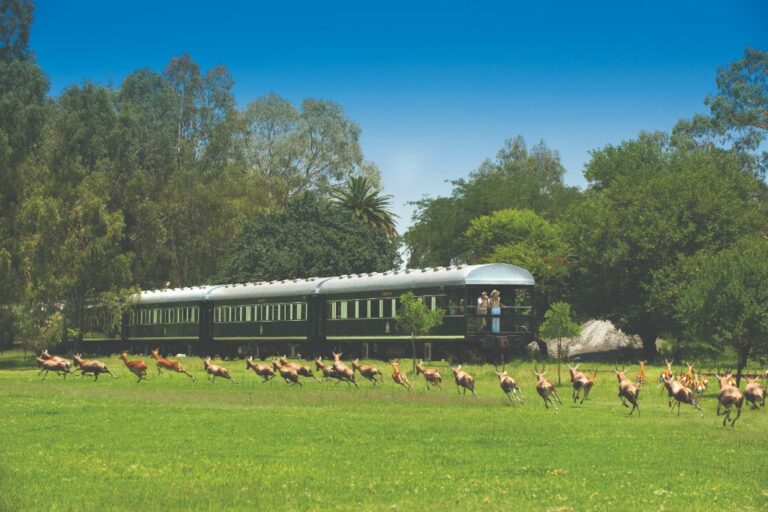 Step aboard Rovos Rail and experience a bygone era of travel along routes steeped in African beauty.

According to his wife Anthea, Rohan Vos has always been obsessed with things mechanical. In 1985, following a train trip to Magaliesberg, Rohan attended his first auction to buy a coach or two. Described as a man of vision, Rohan soon became self-sufficient from the South African Transport Services and was granted permission to run his own personal “family caravan” in December 1986, giving birth to the idea of running a vintage train as a business venture.

On April 29, 1989, a locomotive and seven carriages with four paying passengers, friends and press, set off for the Eastern Transvaal, the start of what would become known as the Rovos Rail. Since then, Rovos Rail has earned an international reputation for its truly world-class travel experiences, offering bespoke train safaris through the heart of Africa, combining magnificent scenery with the glamour and excitement of the golden age of leisure travel.

In a series of journeys lasting from 48 hours to 15 days, Rovos Rail links some of the sub-continent’s greatest destinations. The beautifully rebuilt vintage trains carry a maximum of 72 passengers in 36 superbly appointed suites. It is also available for charter for corporate or private functions and is suitable for daytime journeys.

The classic wood-panelled coaches are the epitome of luxury with period Edwardian features combined with modern technology. Each train includes accommodation carriages, dining cars, a lounge car, a small gift shop, a smoking lounge and an observation car which includes an open-air balcony.

There are three types of suites, varying is size, each one elegant and offering passengers privacy, comfort and luxury. Attention has been given to space maximisation, including adequate storage, with limited cupboard space.

The world-class experience on the Rovos Rail recaptures the romance of a bygone era. Travellers can experience the magic and mystery of Africa in a relaxed and elegant fashion. With a discreet, 24-hour service, a friendly and enthusiastic team of chefs and host, exceptional speciality meals catering for all dietary requirements are suitably paired with South Africa’s finest wines.

Step aboard the most luxurious train in the world and take a journey of a lifetime. *

Off the Beaten Track

Up, Close and Personal